One by one, the media outlets you know and love are falling prey to stealth marketing. Call the roll: The New York Times. The Wall Street Journal. NBC’s The Tonight Show. The Washington Post. And etc. (See here for all the details.) 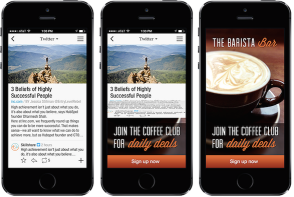 Twitter acquired ad platform MoPub way back in September of last year and, after a few months of almost no fanfare, has started to announce some new features which the company hopes will become a significant source of annual revenue.

The MoPub exchange reaches over one billion iOS and Android users, serving more than 130 billion ad requests each month, and MoPub believes the reach for its native advertising solution is “significantly larger”.

Not so much rolling, but roiling, is the rumpus over the brand names featured in New York’s statewide standardized English tests.

From the Associated Press . . .