The Native Advertisers Are Restless

Posted on December 15, 2016 by Campaign Outsider

Once around the park, James, and don’t spare the sources!

The hardtracking staff has started to discern the dawn of Sneak 2.0 – a second wave of stealth marketing that tries to herd the ads in sheep’s clothing into more profitable quarters.

Digital publishers may have embraced “native” formats as a godsend for new advertising revenues, but the majority of ad execs are more keen on using the method on social media outlets vs. conventional content publishers. That’s the top-line finding of a new survey of advertisers and agency executives being released today by Advertiser Perceptions Inc., which suggests native advertising is reaching an inflection point that will soon be dominated primarily by social media. 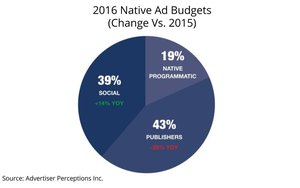 Then again, where native ads run might not matter so much, given this Joe Lazauskas piece at NiemanLab . . .