Consumers Who Bought Shape-ups, Other Toning Shoes Will Be Eligible for Refunds 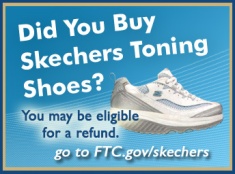 Inc. has agreed to pay $40 million to settle charges that the company deceived consumers by making unfounded claims that Shape-ups would help people lose weight, and strengthen and tone their buttocks, legs and abdominal muscles.

Besides Shape-ups, Skechers also made deceptive claims about its Resistance Runner, Toners, and Tone-ups shoes, the FTC alleged.

One week ago Skechers was accused of shortchanging its workers. From the Huffington Post’s Peter Dreier:

Footwear Giant Skechers Can Run, but It Can’t Hide From Abusive Labor Practices

Skechers, one of America’s largest footwear companies, can run, but it can’t hide.

A report released Wednesday by the Los Angeles Alliance for a New Economy (LAANE), “Out of Step: How Skechers Hurts Its California Supply Chain Workers,” exposes the company’s troublesome labor practices. It is not a pretty sight.

The report reveals the mistreatment of the workers who deliver Skechers’ products — primarily shoes, apparel and luggage — from ports to warehouses to retail stores around the country and around the world. In doing so, “Out of Step” also exposes the huge gap between Skechers’ carefully crafted image as a hip retailer, which has led it to become a $1.8-billion corporation, and the reality of a company for whom truck drivers and warehouse workers labor under harsh, stressful, and exploitative conditions.

And one day ago Skechers admitted shortchanging New York Times readers in this strange half-page-ad tribute to Double Crown winner California Chrome (Skechers signed a sponsorship deal with the thoroughbred’s owners right before the third leg of the Triple Crown):

First off, the Belmont Stakes (where California Chrome finished a disappointing fourth) was almost four weeks ago.

Beyond that, shouldn’t Skechers have taken out a 2/3-page ad in the Times?

Weird all the way around the course, eh?