Posted on November 29, 2013 by Campaign Outsider

Well the Missus and I trundled down to The Big Town last weekend and say, it was swell.

(After, that is, we crawled our way through the Mother-in-Law of All Traffic Jams: From the New York City line to the Triboro Bridge – 10 miles, 90 minutes; the tie-up: three work vehicles in the righthand lane around the Pelham Bay Parkway exit; at least we got some reading done in the process.)

Anyway, here’s some of what we caught.

First things first: Al Hirshfeld was a genius, and the current exhibit at the New York Public Library for the Performing Arts at Lincoln Center proves it. The Line King

(through January 4, 2014) features “the largest library collection of Hirschfeld artwork and archival material . . . brought together in a new exhibition.”

Al Hirschfeld (1903 – 2003) brought a new set of visual conventions to the task of  performance portraiture when he made his debut in 1926. His signature work, defined by a linear calligraphic style, made his name a verb: to be “Hirschfelded” was a sign that one has arrived. Hirschfeld said his contribution was to take the character, created by the playwright and portrayed by the actor, and reinvent it for the reader. Playwright Terrence McNally wrote: “No one ‘writes’ more accurately of the performing arts than Al Hirschfeld. He accomplishes on a blank page with his pen and ink in a few strokes what many of us need a lifetime of words to say.”

Our favorite: The Westward Ha! vitrine that memorialized the round-the-world trip Hirshfeld took with S.J. Perelman, complete with suitcases.

The hardworking staff has subsequently taken Westward Ha! out of the library. We’ll keep you posted.

Then on to the New-York Historical Society for The Armory Show at 100: Modern Art

and Revolution (through February 23, 2014), a sort-of recreation of the breakthrough 1913 exhibition that “introduced the American public to European avant-garde painting and sculpture.”

The end result: lots of mediocre American art of the period juxtaposed with a smattering of standard-shattering works like Marcel Duchamp’s Nude Descending a Staircase.

This exhibition, co-organized by The Museum of Modern Art, The Menil Collection, Houston, and The Art Institute of Chicago, is the first to focus exclusively on the breakthrough Surrealist years of René Magritte, creator of some of the 20th century’s most extraordinary images. Beginning in 1926, when Magritte

first aimed to create paintings that would, in his words, “challenge the real world,” and concluding in 1938—a historically and biographically significant moment just prior to the outbreak of World War II—the exhibition traces central strategies and themes from the most inventive and experimental period in the artist’s prolific career. Displacement, transformation, metamorphosis, the “misnaming” of objects, and the representation of visions seen in half-waking states are among Magritte’s innovative image-making tactics during these essential years.

It’s a knock-out exhibit, unlike American Modern (through January 26, 2014), a mishmash of basement-and-attic MoMa works.

Drawn from MoMA’s collection, American Modern takes a fresh look at the Museum’s holdings of American art made between

1915 and 1950, and considers the cultural preoccupations of a rapidly changing American society in the first half of the 20th century. Including paintings, drawings, prints, photographs, and sculptures, American Modern brings together some of the Museum’s most celebrated masterworks, contextualizing them across mediums and amid lesser-seen but revelatory works by artists who expressed compelling emotional and visual tendencies of the time.

Wall Street Journal critic Karen Wilkin really didn’t like the exhibit, saying “‘American Modern’ made me wonder if these wonderful works shouldn’t be lent, long term, to the Whitney Museum of American Art. There, they would have an informative context and almost certainly be properly celebrated.”

From there the Missus and I wandered over to the Eykyn Maclean Gallery to catch Surrealism and the rue Blomet (through December 13).

One of our favorites was Jean Dubuffet’s Frayeur.

Then it was on to Venus Over Manhattan, which describes itself as “a curatorial platform for exhibitions and projects that expand upon the conventional gallery format through collaborations with artists, dealers, collectors, curators, and institutions.” Currently on exhibition there: Calder Shadows.

A group of a dozen rare Calder mobiles and stabiles created between 1929 and 1974 will be presented in darkness. Each sculpture will be lit so that its shadows become the exhibition’s subject: wire will become oscillating line drawings and flat metal forms will become independent presences that dance along the walls, ceiling, and floor of the gallery.

It’s there through December 21, and it’s very cool.

Somewhat less so is Robert Indiana: Beyond Love at the Whitney Museum. All you need to know:

This retrospective reveals an artist whose work, far from being

unabashedly optimistic and affirmative, addresses the most fundamental issues facing humanity—love, death, sin, and forgiveness—giving new meaning to our understanding of the ambiguities of the American Dream and the plight of the individual in a pluralistic society.

Above is Indiana’s reworking of Charles Demuth’s I Saw the Figure Five in Gold (at the Metropolitan Museum of Art). Not sure what the knockoff added to the conversation, but maybe I’m not as tuned into the ambiguities of the American Dream as I should be.

On the way back to midtown, we stopped by Barneys New York to catch their holiday windows, which are usually interesting if overdone. This year is no different. From WWD: 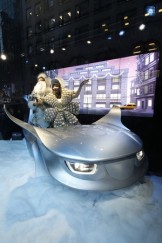 a futuristic vision of Manhattan. In another window there’s a fantastical ride through New York. Shoppers can take part by entering the actual window and “riding” the BNY NYC Santa’s sleigh, which looks something like a Batmobile or stingray. Barneys collaborated with an international group of artists, but Dennis Freedman, creative director of Barneys, said, “We never considered this art. We’re entertaining the public.”

Well, mildly entertaining some of the public.

Later we went to 59E59 Theaters to see All That Fall, the stage version of a Samuel Beckett radio play.

First broadcast on the BBC in 1957, All That Fall is Beckett’s deeply personal, scorchingly funny and grippingly dramatic tale of one woman’s comic and moving journey to meet her husband at the train station.

We love Eileen Atkins and Michael Gambon, but this one didn’t quite do it for us.

First up, The Met for Balthus: Cats & Girls (through January 12, 2014), which the New York Times called “a rather strange, even refreshing exercise.”

Strange, yes; refreshing – not so sure.

Balthus is best known for his series of pensive adolescents who dream or read in rooms that are closed to the outside world.

Focusing on his finest works, the exhibition will be limited to approximately thirty-five paintings dating from the mid-1930s to the 1950s. Between 1936 and 1939, Balthus painted his celebrated series of portraits of Thérèse Blanchard, his young neighbor in Paris. Thérèse posed alone, with her cat, or with her two brothers. When Balthus lived in Switzerland during World War II, he replaced the forbidding austerity of his Paris studio with more colorful interiors in which different nymphets daydream, read, or nap.

Or look out the window.

Our final exhibit was Interwoven Globe: The Worldwide Textile Trade (through January 5, 2014). Times art critic Roberta Smith waxed rhapsodic about it, but we went meh.

Then we went home.