The Arts Seen in NYC (‘Summer with the Averys’ Edition)

Well the Missus and I trundled down to the Big Town last weekend to check out this that and the other thing and, say, it was swell.

After the usual funhouse ride through Six Flags Over Midtown Manhattan, we headed down to The Museum at FIT to catch Minimalism/Maximalism (through November 16), which in fairness should really be called Artful/Awful.

An example of the former: 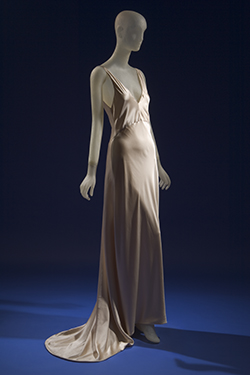 An example of the latter: 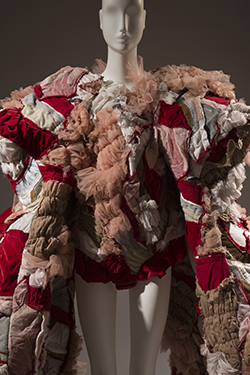 From there we drifted up Sixth Ave to Bryant Park to soak in la comedie humaine – and how lucky were we to catch this year’s inaugural Yoga Night! Slogan:”Perfect your downward dog at our outdoor yoga classes.” 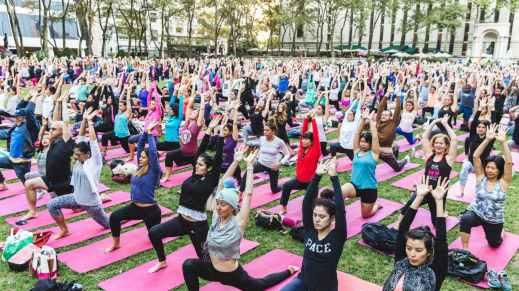 When the Yoga Mistress started taking about centeredness and mindfulness, though, we took ourselves elsewhere.

After a nice dinner at The Red Flame (which blessedly is now rid of the scaffolding that has obscured the diner for umpteen years), we wandered over to the Manhattan Theatre Club’s Samuel J. Friedman Theatre for the Almeida Theatre production of Ink. (That’s a lot of -re theaters, eh?) 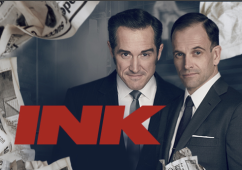 winner Bertie Carvel) purchases a struggling paper, The Sun, and sets out to make it a must-read smash which will destroy – and ultimately horrify – the competition. He brings on rogue editor Larry Lamb (Olivier winner Jonny Lee Miller) who in turn recruits an unlikely team of underdog reporters. Together, they will go to any lengths for success and the race for the most ink is on! Inspired by real events . . .

Larry Lamb is tasked by Rupert Murdoch with overtaking – in one year – The Mirror, which has the largest circulation in the U.K. (four million daily), while The Sun is among the smallest.

No spoilers here. But I will say that the production is loud, manic, and fabulously staged. And the actors are terrific.

Here’s a clip about the Theme Weeks that The Sun incessantly ran.

The play is not just smart – it’s prescient. The Sun was determined to be a disruptor, giving voice to the people and relying on them for content.

One last note: An Australian woman was sitting behind us, decrying how Rupert Murdoch has been so destructive to democracy the world over. But she failed to recognize the creative Murdoch – the one who has seen the gaps in the media world that he could fill with The Sun, the Fox Broadcast Network, the Fox News Channel.

The mistake people make is in thinking Rupert Murdoch has bedrock conservative principles. Not even close. He’s only interested in principal – how much money he can make exploiting the public’s basest instincts.

And that’s what Ink so deftly illustrates.

Bright and early next morning it was off to the Museum of Modern Art – which will close this weekend to undertake a four-month $450 million expansion – to check out Lincoln Kirstein’s Modern, which we missed last time we were in the Big Town.

“I have a live eye,” proclaimed Lincoln Kirstein, signaling his wide-ranging vision. Lincoln Kirstein’s Modern explores this polymath’s sweeping contributions to American cultural life in the 1930s and ’40s. Best known for cofounding New York City Ballet and the School of American Ballet with George Balanchine, Kirstein (1907–1996), a writer, critic, curator, impresario, and tastemaker, was also a key figure in MoMA’s early history. With his prescient belief in the role of dance within the museum, his championing of figuration in the face of prevailing abstraction, and his position at the center of a New York network of queer artists, intimates, and collaborators, Kirstein’s impact remains profoundly resonant today.

Oh, yes – and major enabler of Nazi-sympathizing starchitect Philip Johnson. But we’ll pass over that in silence, as Cicero used to say.

Here’s MoMA’s video if you’re interested. And here are the images. For us, the best parts of the exhibit were the artworks Kirstein himself collected, such as this one. 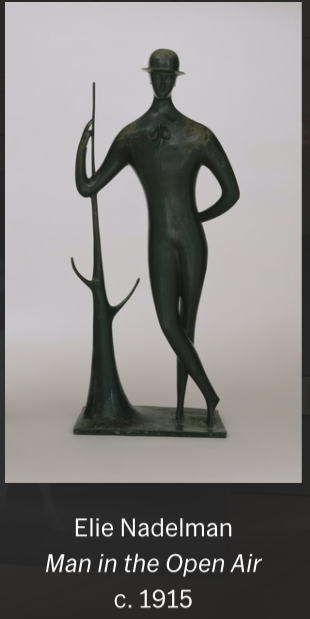 Overall, an admirable presentation about a not-so-admirable guy.

Our farewell tour continued at The Frick Collection, which is planning a renovation of its own, as The Art Newspaper reported last fall. 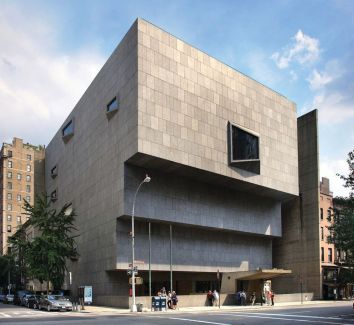 In an unusual game of musical chairs, the Metropolitan Museum of Art in New York and the Frick Collection announced today (21 September) that the Met will vacate the Brutalist Breuer building on Madison Avenue in 2020. Its departure will make way for the Frick to move in late that year while its mansion undergoes a renovation and expansion five blocks away.

In addition to the sheer pleasure of wandering through Frick’s old pad, there was Whistler as Printmaker: Highlights from the Gertrude Kosovsky Collection (through September 1).

The Frick Collection is pleased to announce a promised gift of 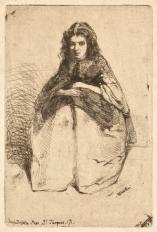 forty-two works on paper by James McNeill Whistler (1834–1903), from the collection of Gertrude Kosovsky. An exhibition highlighting fifteen prints and one pastel from the gift is now on view in the Cabinet Gallery. The collection was formed over five decades by Mrs. Kosovsky, with the support of her husband, Dr. Harry Kosovsky, and includes twenty-seven etchings, fourteen lithographs, and one pastel, which range from Whistler’s early etchings dating from the late 1850s to lithographs of the late 1890s.

As per usual with Whistler’s etchings, they were a joy to look at – especially with the aid of the magnifying glasses the Frick kindly provided.

Also on display was Elective Affinities: Edmund de Waal at The Frick Collection (through November 17) – “a temporary installation of sculptures by acclaimed author and ceramist Edmund de Waal. Site-specific works made of porcelain, steel, gold, marble, and glass are displayed in the museum’s main galleries alongside works from the permanent collection.” 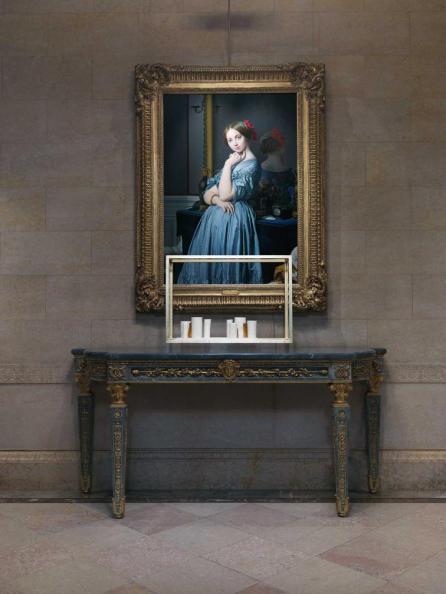 Here’s a video that features the artist discussing his technique and the concepts behind the installation. It’s definitely worth the ten minutes.

From the Frick we moseyed up Fifth Ave to the Metropolitan Museum of Art, where the main attraction right now is Camp: Notes on Fashion (through September 8).

Through more than 250 objects dating from the seventeenth century to the present, The Costume Institute’s spring 2019 exhibition explores the origins of camp’s exuberant aesthetic. Susan Sontag’s 1964 essay “Notes on ‘Camp'” provides the framework for the exhibition, which examines how the elements of irony, humor, parody, pastiche, artifice, theatricality, and exaggeration are expressed in fashion.

Here’s Sontag’s essay and here’s a guided tour of the exhibit.

Sontag says that “the essence of Camp is its love of the unnatural: of artifice and exaggeration.” The Met exhibit says that Camp is whatever the curator wants it to be. So the whole thing – audio, video, clothing, accessories, etc. – is a hot mess. Add to that the swarms of people taking selfies and barely looking at any one thing for more than ten seconds and the whole thing teeters into the realm of the ludicrous.

But if Camp is a hot mess, Play It Loud: Instruments of Rock & Roll (through October 1) is just hot.

The exhibition is co-organized with the Rock & Roll Hall of Fame, and [presents] approximately 130 instruments alongside posters and costumes. Many of rock’s most celebrated and recognized instruments are featured, representing artists across generations and subgenres. In addition to institutional and private collectors, many musicians are lending their performance and recording instruments.

You can see the instruments here, from the Beatles drum kit to Jimmy Page’s guitar that was stolen from a Minneapolis airport in 1970 and – amazingly – returned to him (the exhibit doesn’t say how) in 2015. A Whitman’s Sampler of videos can be found here.

Last stop at The Met was the roof to take in Alicja Kwade: ParaPivot (through October 27).

Berlin-based artist Alicja Kwade’s (born 1979, Poland) work is elegant, rigorous, and highly experiential. Using a wide range of media, Kwade creates sculptures and installations that reflect on time, perception, and scientific inquiry. With equal parts poetry and critical acumen, she calls into question the systems designed to banish doubt from the world and make sense of an otherwise unfathomable universe. Ultimately, Kwade seeks to heighten both the mystery and the absurdity of the human condition in order to enhance our powers of self-reflection.

For The Met, Kwade has created two sculptures using steel and stone to evoke a miniature solar system . . .

Here’s video of the artist talking about her work. It’s really quite smart.

From there we wandered down Madison to Gagosian Gallery to see Picasso’s Women: Fernande to Jacqueline (through June 29). 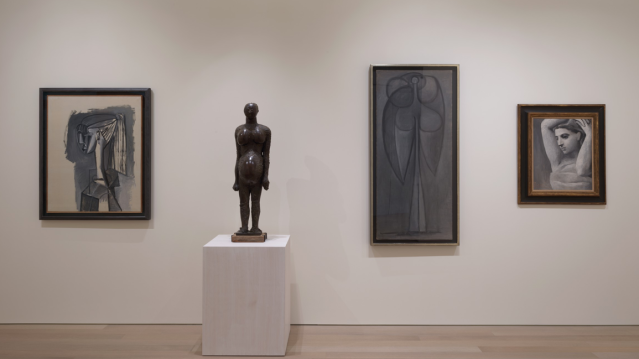 I am perhaps a painter without style.
—Pablo Picasso

Gagosian, in partnership with members of the Picasso family, is pleased to present Picasso’s Women: Fernande to Jacqueline, an exhibition of paintings and sculptures that attests to the central role and influence of the many women in Picasso’s life. It has been organized in honor of the gallery’s late friend and colleague, Sir John Richardson.

In the early 1960s, Richardson was planning to write a study of Picasso’s portraits and spent hours with the artist, poring over reproductions of his works. As Picasso spoke about the complexities of his pictorial thinking—pointing out, for example, that a portrait of Dora Maar might also contain elements referring to her romantic predecessor Marie-Thérèse Walter, and her successor Françoise Gilot—Richardson began to believe that a detailed biographical treatment of Picasso’s portraiture would close a notable gap in Picasso scholarship. Decades later he would sit down to write what would become the monumental multivolume biography, A Life of Picasso. 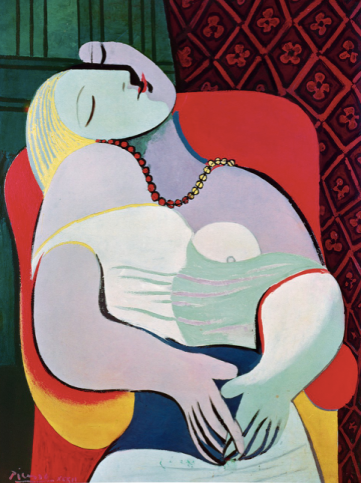 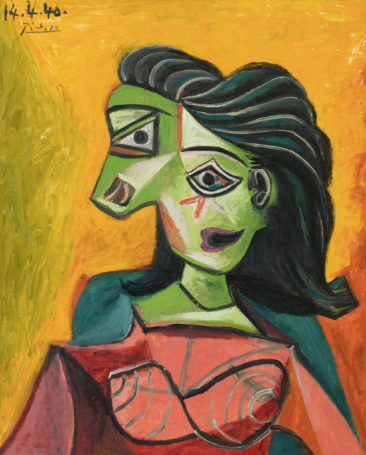 Then we swung by The Met Breuer (probably not part of our farewell tour since we’ll be back in the Big Town a couple of times before it closes) to catch Phenomenal Nature: Mrinalini Mukherjee (through September 29).

Phenomenal Nature marks the first retrospective of the artist in the United States. The exhibition brings together fifty-seven works by Mukherjee and explores the artist’s longstanding engagement with fiber, along with her significant forays into ceramic and bronze towards the middle and latter half of her career.

A committed sculptor who worked intuitively, Mukherjee explored the divide between figuration and abstraction. Nature was her primary inspiration, and she was further informed by her enthusiasm for Indian historic sculpture, modern design, and local crafts and textile traditions. Phenomenal Nature highlights the radical intervention Mukherjee made in her adaptation of crafting techniques with a modernist formalism. 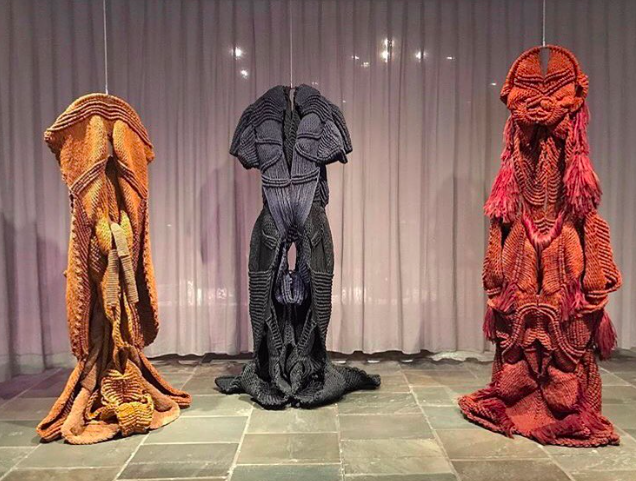 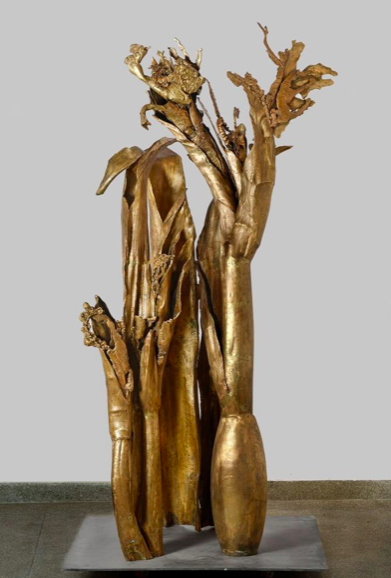 We didn’t know what to expect from the exhibit, but it’s a knockout.

To finish things off, we caught the Manhattan Theatre Club’s production of Donald Margulies’ Long Lost (through June 30). 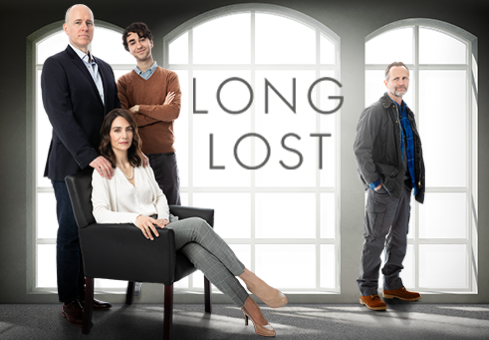 The Pulitzer Prize-winning author of such works as Time Stands Still and Dinner with Friends returns to MTC with a funny, unsettling, ultimately moving play about the limits of compassion and filial obligation. When troubled Billy appears out-of-the-blue in his estranged brother David’s Wall Street office, he soon tries to re-insert himself into the comfortable life David has built with his philanthropist wife and college-age son. What does Billy really want? Can he be trusted? And how much can family bonds smooth over past rifts?

The real question – and problem with the play – is this: Could Billy be any more unlikable and unsympathetic? The actors are fine, but the play itself is weak.

Then again, as my late, great father-in-law Marvin used to say, a bad play is better than a good movie.

On the way home we swung by the Bruce Museum in Greenwich to see Summer with the Averys [Milton | Sally | March] (through September 1). 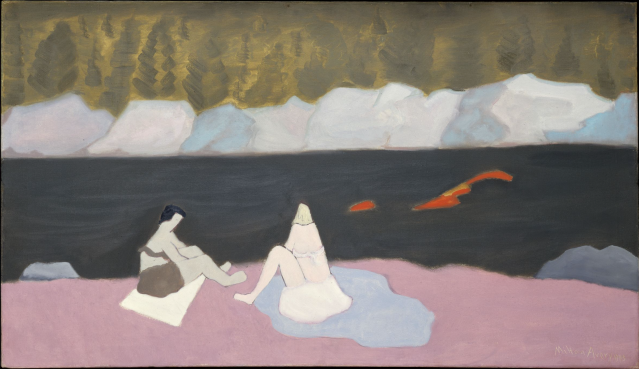 On May 11, 2019, the Bruce Museum [opened] Summer with the Averys [Milton | Sally | March]. Featuring landscapes, seascapes, beach scenes, and figural compositions—as well as rarely seen travel sketchbooks­—the exhibition takes an innovative approach to the superb work produced by the Avery family. Along with canonical paintings by Milton Avery, the show offers a unique opportunity to become acquainted with the remarkable art created by Avery’s wife Sally and their daughter March.

What the exhibit vividly displays is not just the closeness of the family, but the familial resemblance of the art they produced. 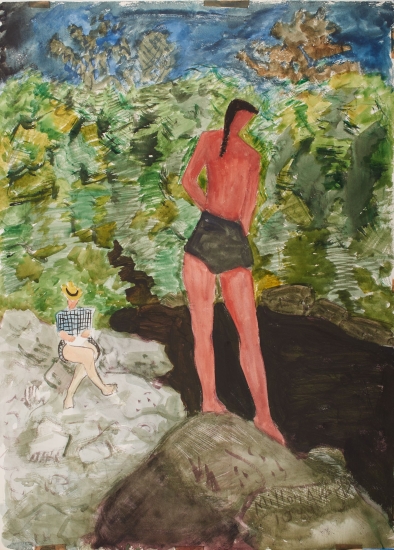 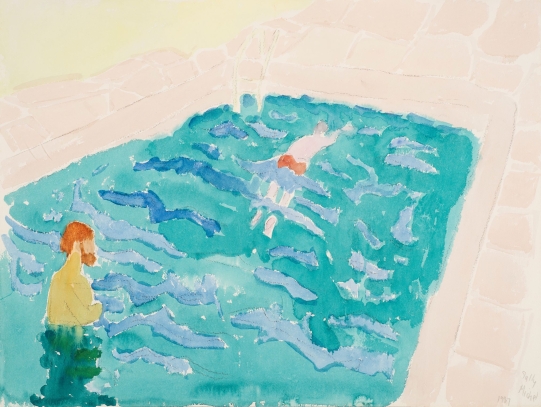 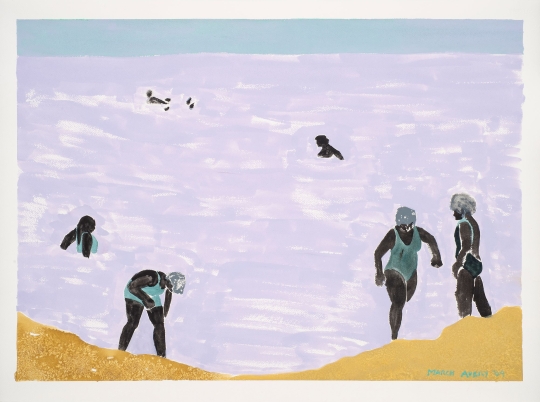 Before we left the museum we looked in on Sharks! Myths and Realities and learned this fun fact: More Americans are killed every year by ballpoint pens and vending machines than by sharks.  You should look it up.