Posted on September 16, 2016 by Campaign Outsider

From our Late to the Third Party desk

In this forever series that features people with all those dollars and no sense, the adtracking staff has seen some deeply quixotic efforts to move – and move to action – New York Times readers.

(We think immediately of Yoko Ono’s numerous just-set-your-money-on-fire WAR IS OVER! If You Want It ads, or the Dump Trump ad Hampton Creek CEO Josh Tetrick ran in July.) 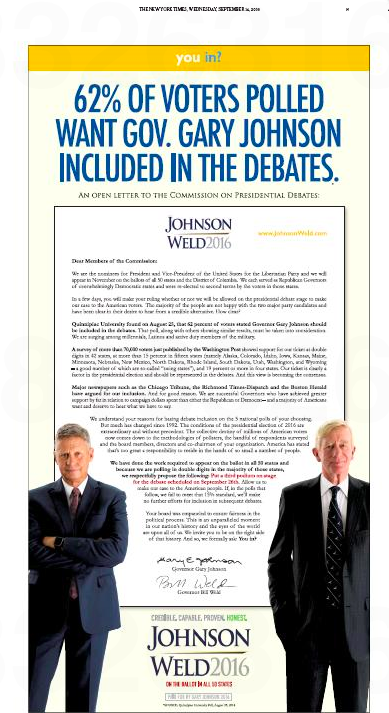 You can read the whole Open Letter to the Commission on Presidential Debates here, but this is the gotta be nuts graf:

We have done the work required to appear on the ballot in all 50 states and because we are polling in double digits in the majority of those states, we respectfully propose the following: Put a third podium on the stage for the debate scheduled on September 26th. Allow us to make our case to the American people. If, in the polls that follow, we fail to meet that 15% standard, we’ll make no further efforts for inclusion in the subsequent debates

Sorry to break the news to you, boys, but that’s gone over like the metric system.

Because while 62% of voters might want Johnson in the presidential debates, only about one-sixth of them want him in the Oval Office. So Johnson/Weld 2016 just burned over $100,000 for . . . nothing.

Hey, that’s how the system works.

Then again, as Yoko Ono might say, THE SYSTEM IS OVER! If You Want It.