Posted on February 12, 2020 by Campaign Outsider

Well the Missus and I trundled up to Andover this past weekend to check out the new exhibits at the Addison Gallery of American Art and say, they were swell.

We started off with Man Up! Visualizing Masculinity in 19th-Century America (through April 5).

The 19th century witnessed the development of a notion of masculinity that tied the worth of a white man to his performance in the workplace—from which women and other minorities were excluded—and to his capacity to accumulate capital and advance socially. By the turn of the 20th century, 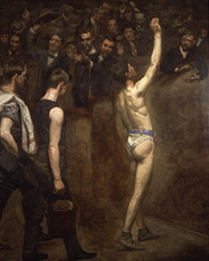 pervasive anxiety posed by the threat of emasculation and the constant need to prove oneself as a man fostered a sense of an ideal manliness that was cutthroat or “primitive,” a masculinity characterized by passion, vigor, and aggressiveness and manifested through violence, displays and abuses of power, and alienation. Drawn from the Addison’s collection, the works on view in this exhibition reflect the constant redefinition of masculinity in American society during the 19th and early 20th centuries, inviting us to think critically about the shifting definitions of gender roles.​​

Lots of interesting work, both paintings (that’s Thomas Eakins’s Salutat, 1898, above) and photographs.

Next we took in Expanding the Narrative: Recent Acquisitions (through March 1).

​​The Addison Gallery opened its doors in 1931 with a core collection of 423 objects purchased for or given to the museum by Phillips Academy alumnus, Thomas Cochran and his close friends. Since then, the museum has annually added to the collection via generous donation and judicious purchase to make it what it is today–over 21,000 works representing the best of American art across media.

Addison curators carefully choose each work to enter the collection, selecting objects that augment and amplify the museum’s already established strengths, initiate conversations and offer meaningful connections with works of different periods and media, and expand the museum’s ability to present a fuller range of American art.

But the main event for us was Gordon Parks: The New Tide, Early Work 1940–1950 (through April 26), a dazzling display of photographic dexterity and encyclopedic diversity.

​​During the 1940s, American photographer Gordon Parks (1912–2006) grew from a self-taught photographer making portraits and documenting everyday life in Saint Paul and Chicago to a

visionary professional shooting for Ebony, Glamour, Smart Woman, and Life. For the first time, the formative first decade of Parks’s 60-year career is the focus of an exhibition, which brings together 150 photographs and ephemera—including magazines, books, letters, and family pictures. The exhibition will illustrate Parks’s early experiences at the Farm Security Administration, Office of War Information, and Standard Oil (New Jersey), as well as his close relationships with Roy Stryker, Langston Hughes, Richard Wright, and Ralph Ellison and reveal how th​ese helped shape his groundbreaking style. 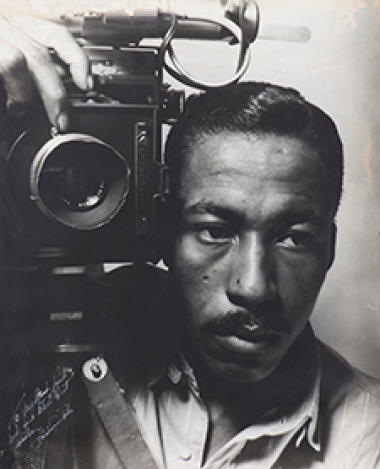 Gordon Parks 1942 portrait of long-suffering Washington government charwoman Ella Watson (one of 90 poignant photographs he took of her), which wound up on the cover of Life magazine.

The other big exhibit currently at the Addison is A Wildness Distant from Ourselves: Art and Ecology in 19th-Century America (through July 31) but we sort of didn’t get it so we gave it the swift.

And we totally missed Come As You Are: American Youth (through March 8), “curated by Phillips Academy students in Art 400, Visual Culture: Discovering the Addison Collection, and . . .  presented in the Museum Learning Center,” which is why we missed it.

But you shouldn’t. It’s all well worth a trundle.