Posted on November 27, 2017 by Campaign Outsider

From our M.C. Escher desk

Yesterday, this full-page ad ran in about 50 major U.S. newspapers. 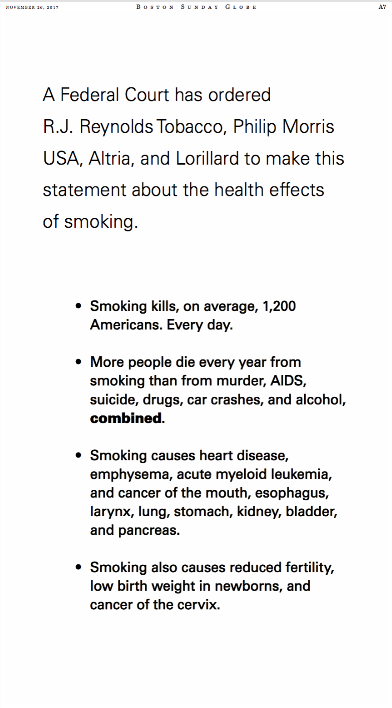 And for the next year, this TV spot will run five times a week during prime time on ABC, NBC, and CBS.

Or maybe not. We’ll get to that in a minute.

First, though, here’s why you’ll be seeing those ads for the next 52 weeks.

As Katie Lannan of the State House News Service has recounted, in 1999 the Clinton Department of Justice “filed racketeering charges against nine cigarette manufacturers and two industry organizations, alleging they had violated racketeering laws by engaging in conspiracy to deceive the public about the health effects of smoking, the addictiveness of nicotine, and related matters.”

The DOJ sought to recover $280 billion in either 1) ill-gotten profits from deceiving the public about the health risks of cigarette smoking, or 2) healthcare costs associated with tobacco-related illnesses, depending on which news reports you believe.

Regardless, in 2006 Federal District Court Judge Gladys Kessler ruled that the tobacco companies had deceived the American public about the devastating health effects of smoking, suppressed research, destroyed documents, manipulated the use of nicotine, and distorted the truth about low tar and light cigarettes.

But . . . there could be no financial penalties under the civil racketeering charges the tobacco companies were convicted of, so they were ordered to issue “corrective statements” to inform the public of their decades-long deception.

Which led to a decade-long wrangle over the language in those statements. And to their eventual watering down. From the New York Times:

Proposed versions of the ads in 2011 appeared tougher. One said: “We told Congress under oath that we believed nicotine is not addictive. We told you that smoking is not an addiction and all it takes to quit is willpower. Here’s the truth: Smoking is very addictive. And it’s not easy to quit. We manipulated cigarettes to make them more addictive.”

But the tobacco companies said statements like that were “forced public confessions” designed to “shame and humiliate them.” So they were reduced to what you see above.

Then again, some say those statements aren’t corrective at all. Robert N. Proctor,  a professor of history at Stanford and the author of Golden Holocaust: Origins of the Cigarette Catastrophe and the Case for Abolition, wrote this in a Saturday Times op-ed.

What’s crucial to appreciate is that the corrective statements are not being issued voluntarily. And nowhere in the statements do the companies acknowledge the truth of what they are saying. In this sense, the statements are not really even admissions. Judge Kessler’s original order had required them to be prefaced by a clear “Here is the truth.” That requirement is now gone.

Part of that is true: There’s no “Here is the truth” in the ads. But they do state that “A Federal Court has ordered . . . ” So that’s not exactly “voluntary.” Cold comfort, to be sure.

Others say this whole campaign is too little too late, given Big Tobacco’s usual modus operandi. From the Richmond Times-Dispatch:

“Their legal strategy is always obstruct, delay, create confusion and buy more time,” said Ruth Malone of the University of California, San Francisco, who has studied the industry for 20 years. “So by the time this was finally settled, newspapers have a much smaller readership and, nowadays, who watches network TV?”

Well, not to get technical about it, lots of people.  But not so many young people, who are the ones who need to see anti-smoking messages.

Those corrective statements might be the only anti-smoking messages anyone sees in mainstream media for the next year.

That’s because state governments, which used to underwrite the bulk of the anti-smoking advertising, have largely decided to take the tobacco money and run . . . almost nothing.

Case in point: The Commonwealth of Massachusetts, which was once a leader in the public health community’s anti-smoking efforts, devoting as much as $55 million in 2000 to fight tobacco use.

Now, the Department of Public Health spends about $4 million a year toward that end, despite raking in almost $900 million annually in tobacco taxes thanks to 1) the $206 billion 1998 Master Settlement Agreement with the major cigarette companies, and 2) the Massachusetts $3.51 per pack tobacco excise tax (fourth highest in the nation, behind New York, Connecticut, and Rhode Island).

According to this 2015 piece in the Gloucester Times, though, “tobacco companies put more than $134 million into advertising in the Bay State during fiscal 2015 — outspending tobacco control efforts 35 to 1 — according to the Campaign for Tobacco-free Kids.”

Meanwhile, the “corrective statements” campaign will cost the tobacco industry a paltry $31 million over the next year.

Sure seems like the real correction should be occurring elsewhere.