Posted on February 3, 2019 by Campaign Outsider

As the hardworking staff previously noted, U.S. tobacco companies have been engaged in a federally mandated campaign of self-flagellation for the past year.

[I]n 2006 Federal District Court Judge Gladys Kessler ruled that the tobacco companies had deceived the American public about the devastating health effects of smoking, suppressed research, destroyed documents, manipulated the use of nicotine, and distorted the truth about low tar and light cigarettes.

But . . . there could be no financial penalties under the civil racketeering charges the tobacco companies were convicted of, so they were ordered to issue “corrective statements” to inform the public of their decades-long deception.

Those corrective statements took the form of full-page ads like this one that ran monthly in about 50 major-market newspapers.

In addition, for the past year the Big Four had to run this TV spot five times a week during prime time on ABC, NBC, and CBS.

It’s no accident that the spot – with its anemic visuals and robotic voiceover – is about as close to invisible as you can get on a TV screen. Nobody dodges responsibility while seeming to accept it better than the tobacco industry

All told, that was a $31 million slap on the wrist to the Big Four, which definitely did not leave a mark.

(Not to get technical about it, but if you want to reach the smokers of the future, newspapers and broadcast television are not exactly the most effective media vehicles.)

Regardless, now comes the third leg of the stooling on themselves: Corrective statements that are attached to cigarette packs themselves. Folded, the mini-brochures measure about 2″ wide x 3″ deep, and here’s what faces you on the back of the pack. 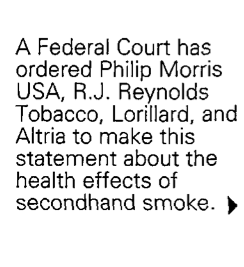 Once again, could any health warning be more benign? Maybe, but this’ll do until something else comes along.

Then again, as we detailed previously, those pale palliatives are probably the only anti-smoking messages most Americans have seen in the past year, given that state governments, which used to underwrite the bulk of the anti-smoking advertising, have largely decided to take the tobacco money and run . . . almost nothing.

Case in point: The Commonwealth of Massachusetts, which was once a leader in the public health community’s anti-smoking efforts, devoting as much as $55 million in 2000 to fight tobacco use.

Now, the Department of Public Health spends about $4 million a year toward that end, despite raking in almost $900 million annually in tobacco taxes . . .