Posted on January 18, 2017 by Campaign Outsider

First in what promises to be a long-running series

It’s news to no one that liberals and conservatives in this great land of ours live in parallel universes.

But with the ascension of Hair Apparent Donald J. Trump to the nation’s highest office, the differences are starting to get kind of . . . granular.

Three days from now, [Donald J.] Trump and congressional Republicans will have the power to begin undoing [Barack] Obama’s presidency. And yet they are going to have a harder time than many people realize.

A clear explanation of why appears in a new book, “Audacity,” by Jonathan Chait of New York magazine, one of today’s must-read political journalists. He documents the scale of Obama’s domestic policy, on health care, taxes, finance, climate, civil rights and education. Chait also explains why it won’t simply disappear. 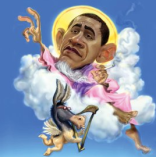 We shouldn’t doubt that President Obama will read the new book by the liberal journalist Jonathan Chait. The title alone will be enough to grab him: Audacity: How Barack Obama Defied His Critics and Created a Legacy That Will Prevail. He will read it slowly and carefully, Montblanc at the ready to underline notable passages and jot down marginalia (How true! and Excellent point! and Tell it to Michelle!).

And when he puts it aside he will feel just a little bit uneasy. Maybe he’ll even ink a note on the final page: This is the best they can do?

Chait writes about politics for New York magazine, and in the crowded imperial court of Obama’s journalists he stands apart—the courtier’s courtier, the boot-licker against whom all boot-licking must be measured.

Jonathan Chait is either 1) a “must-read” political journalist, or 2) “the boot-licker against whom all boot-licking must be measured.”