Posted on January 15, 2017 by Campaign Outsider

Mike Allen, the man the White House used to wake up to, has moved his home address from Politico to the delusional startup Axios, where he currently curries favor with D.C.’s movers and shakers – and especially Trumpsters. 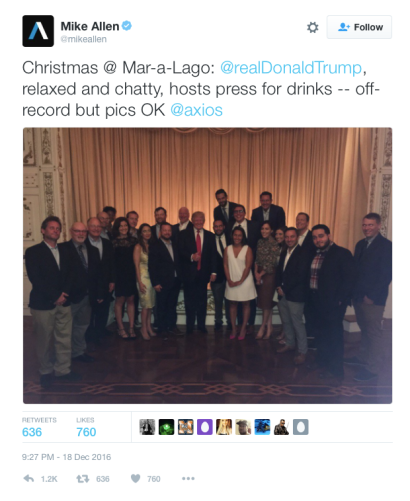 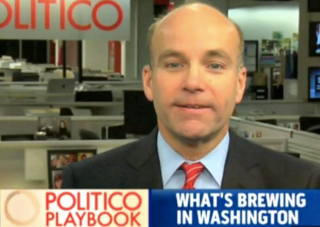 Mike Allen, co-founder of both Politico and the soon-to-launch Axios media company, praised Breitbart News for covering critical issues so often ignored and scorned by other outlets, implying they paved the way for his own new media effort.

“We admire so much of what’s been built at Breitbart. And—Charlie, Matt—one of the things we like about Breitbart is you do things people aren’t. And both journalistically and as a business, that’s a great place to be right now,” Allen told SiriusXM hosts Matthew Boyle and Charlie Spiering.

Allen’s Axios AM newsletter yesterday, which featured this item under the headline “Let’s get ready to rumble.”

Trump tweeted back this morning: “Congressman John Lewis should spend more time on fixing and helping his district, which is in horrible shape and falling apart (not to … mention crime infested) rather than falsely complaining about the election results. All talk, talk, talk – no action or results. Sad!”

What’s really sad is that Allen didn’t even have the decency to fact-check Trump’s tweet. But his successors at Politico Playbook – Anna Palmer and Jake Sherman – did.

WELL … Say what you want about Lewis, but “all talk, talk, talk — no action or results” isn’t the way most people would describe a guy who bled and was jailed in the struggle for civil rights. Also, his district isn’t really falling apart. He has represented the tony Buckhead section of Atlanta for years — he now splits it with another lawmaker — and he represents Emory University and some of the city’s most rapidly gentrifying neighborhoods.

Memo to Mikey: That’s what a real journalist does.

We’ll pass over in silence – for now – Allen’s longstanding allegiance to advertisers, which the Washington Post’s Eric Wemple has dutifully chronicled.

But we’re guessing that will be a whole nother Mike Allen Suck-Up Watch in the near future.