Posted on September 7, 2014 by Campaign Outsider

Well the Missus and I trundled up to Salem yesterday to catch Calder and Abstraction: From Avant-Garde to Iconic at the Peabody Essex Museum and, say, it was swell. 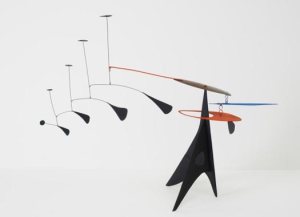 sculpture and made him one of the most celebrated artists of the 20th century. In collaboration with the Calder Foundation, this exhibition brings together 40 of the artist’s mobiles (kinetic metal works) and stabiles (dynamic monumental sculptures) to explore how Alexander Calder introduced the visual vocabulary of the French Surrealists into the American vernacular.

It was Opening Day, so PEM had some special events planned. There was the panel discussion On Redefining Sculpture, which featured “Stephanie Barron, chief curator of modern and contemporary art at the Los Angeles County Museum of Art and curator of the exhibition, and Jed Perl, art critic for The New Republic and author of a forthcoming biography about Alexander Calder.”

Perl was especially engaging – smart, accessible, and interesting. He was the same during the Q&A after a showing of Works of Calder, in which (via Creative Salem) “[filmmaker] Herbert Matter traces the narrative of a child who stumbles upon Calder at work. This short film, with music by John Cage, illustrates how the artist drew on nature for inspiration.”

The narrator/producer was Burgess (The Penguin) Meredith, so that was fun too.

(Even more fun is Perl’s vivisection of Jeff Koons in the current issue of the New York Review of Books, which the hardworking staff read upon arriving home. Killer lede:

Imagine the Jeff Koons retrospective at the Whitney Museum of American Art as the perfect storm. And at the center of the perfect storm there is a perfect vacuum. The storm is everything going on around Jeff Koons: the multimillion-dollar auction prices, the blue chip dealers, the hyperbolic claims of the critics, the adulation and the controversy and the public that quite naturally wants to know what all the fuss is about. The vacuum is the work itself, displayed on five of the six floors of the Whitney, a succession of pop culture trophies so emotionally dead that museumgoers appear a little dazed as they dutifully take out their iPhones and produce their selfies.

The Calder exhibit is on view at PEM through January 4. Not an ouch in the bunch.

2 Responses to Dead Blogging ‘Calder and Abstraction’ at PEM