Posted on April 2, 2014 by Campaign Outsider

Since its NBC debut 60 years ago, The Tonight Show has featured more plugs than Joe Biden’s head. But the recent introduction of GE’s Fallonvention showcase represents a new low for the late night icon.

Last month, Jimmy Fallon had a group of teen inventors come on “The Tonight Show” to show off their gadgets. Anne, 16, 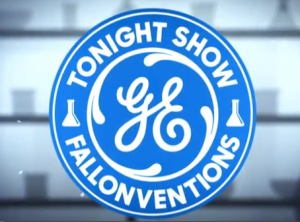 showed off her flashlight powered bythe heat of the human hand. Jonathan, 13, created something called an “iHead,” which is essentially headgear with your iPhone attached to it via suction cup.

This young-inventors showcase is called “Fallonvention,” or rather “GE’s Fallonvention,” and it will be a reoccurring segment on the late night talk show featuring young inventors and their creations, along with Fallon’s own funny inventions and commentary. This is what branded TV looks like. And it is part of GE’s latest big push into the industry’s buzzed-about ad format: native advertising.

According to GE’s executive director of global brand marketing, Linda Boff, “[g]reat content can come from a lot of different places, but funnily enough, it seems to be traditional media can get a little more attention when it comes to native.”