Posted on February 5, 2014 by Campaign Outsider

The relentless Andrew Kaczynski just posted this at BuzzFeed:

An odd email from the former Massachusetts senator. 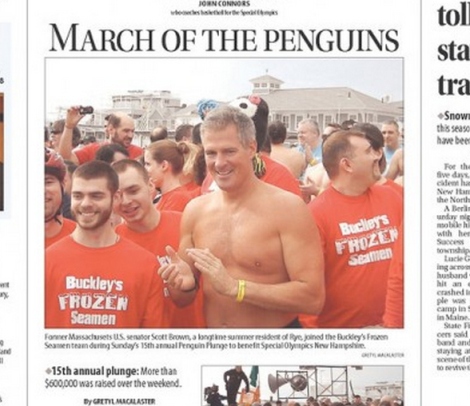 He also recently sent out an email from one of his sponsors about the “5 Signs You’ll Get Alzheimer’s Disease.” The sponsor was Newsmax Magazine and the email showcased a video from “renowned neurosurgeon and nutritionist Dr. Russell Blaylock.”

The problem, according to BuzzFeed, is that “Dr. Russell Blaylock also happens to be a vaccine truther” who believes a whole lot of other nonsense as well. Regardless, the once (and future?) senator sent this to all his Brown-eyed fans. 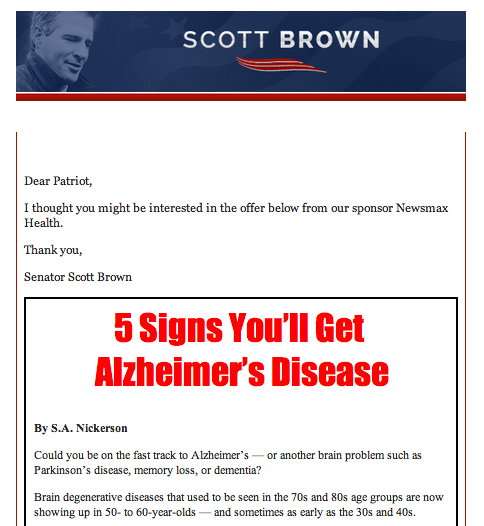 Sure looks like Brown has some brain degeneration going on himself. Presumably he pimped out his email list to make a few bucks, but beam yourself up, Scotto – you really want to be associated with loons like Blaylock?

Even in New Hampshire, that’s a losing play.

Former Massachusetts Sen. Scott Brown said he will sever a business relationship he had with a conservative news website after it used his political mailing list Wednesday morning to send an article with the headline “5 Signs You’ll Get Alzheimer’s Disease.”

It was just the latest in a string of emails from Newsmax.com that were sent using Brown’s email list in recent days. The Alzheimer email even struck Republicans as odd . . .