Posted on February 6, 2014 by Campaign Outsider

Rebecca Smith’s front-page Wall Street Journal piece yesterday about the attempt last year to knock out a California power station is a knockout.

SAN JOSE, Calif.—The attack began just before 1 a.m. on April 16 last year, when someone slipped into an underground vault not far from a busy freeway and cut telephone cables.

Within half an hour, snipers opened fire on a nearby electrical substation. Shooting for 19 minutes, they surgically knocked out 17 giant transformers that funnel power to Silicon Valley. A minute before a police car arrived, the shooters disappeared into the night.

So what, you say?

The attack was “the most significant incident of domestic terrorism involving the grid that has ever occurred” in the U.S., said Jon Wellinghoff, who was chairman of the Federal Energy Regulatory Commission at the time. 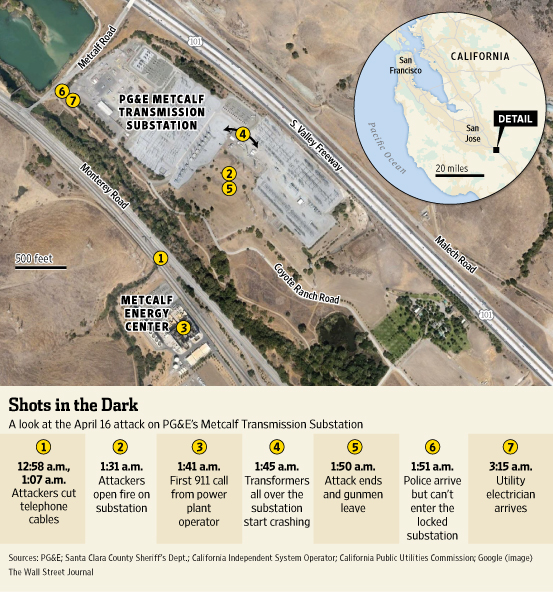 You really should read it.

P.S. The New York Times rides caboose in this piece today, which credits – in a backhanded way – the Journal in paragraph eight.

Debate over the attack was prompted by a Wall Street Journal article published Wednesday that took an in-depth look at the episode, which was a topic of discussion at a congressional hearing in December and was examined by Foreign Policy magazine the same month.

What – the Journal was late to the party? Hey, Timesniks: You’re later.