After This, No Mo

Posted on September 25, 2013 by Campaign Outsider

Roger Angell has this fabulous parting gift for the great Rivera in his New Yorker blog. 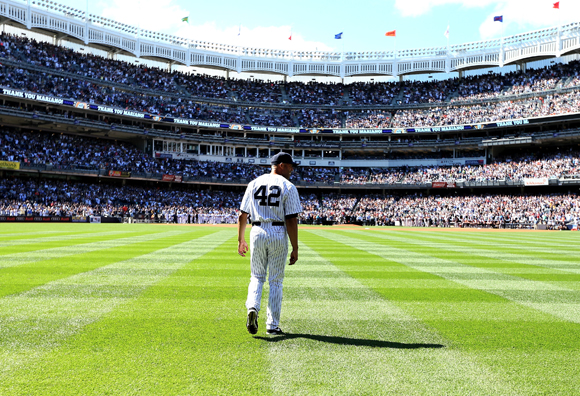 Late on yesterday’s dazzling, post-summer afternoon in the Bronx, each batter and infielder moved and ran with his own autumnal sharp-shadow cutout barely attached at the foot. The brilliant, reminding light was relentless; it never let us up, enamelling the grass at the outset, then producing late-inning gateways of alternate shadow and sun between the mound and home plate that made each pitch flicker in its flight. No, no, you wanted to say: Not so fast. Not yet. (“ONE MO TIME,” said a fan’s held-up plea.) It got late early up there, as Yogi once said, and the outcome we didn’t want arrived just the same, in spite of plaques and speeches. Mariano Rivera’s pregame “Exit Sandman” final-Sunday ceremonies at the Stadium—he’s retiring after nineteen seasons—had been awkwardly merged with Andy Pettitte’s recently announced decision to depart for good, too, after eighteen (all but three with the Yanks), but, because Andy would be starting against the visiting San Francisco Giants and was preoccupied with that, it remained Mo’s day mostly, and sweetly reassuring. Waterford crystal, the comical rocking chair, parents, family, current teammates and old ones. Paulie, Jorge, Bernie, Derek, Tino, manager Joe, Rachel Robinson (Mo, of course, the last player to sport Jackie Robinson’s universally retired uniform number, 42). Michael Kay. Speeches, smiles—Rivera won this category, hands down—and an actual surprise: Metallica, live and in person, there to play his entrance song.

Angell should have his own entrance song – he’s that good a writer – as he proves yet again in this ave atque vale to Rivera (and Pettitte).

Andy was almost great, giving up two hits in seven innings—the first a home run in the sixth by the rookie San Francisco shortstop Ehire Adrianza, and the other a double in the eighth by Pablo Sandoval, which shortly became the winning run—Andy had gone, with a final hat wave —in the Yanks’ excruciating 2-1 defeat. Mariano came on with one out in the eighth, and surrendered a single but no runs, and along the way gave us still again his eloquent entering run from deep center field; the leaning stare-in with upcocked mitt over his heart; the reposeful pre-pitch pause, with his hands at waist level; and then the burning, bending, famed-in-song-and-story cutter. All these, seen once again, have been as familiar to us as our dad’s light cough from the next room, or the dimples on the back of our once-three-year-old daughter’s hands, but, like those, must now only be recalled.

As a Made Yankee Fan in Boston, we’ll miss them both.

But we’ll miss you most of all, Scare Mo.

1 Response to After This, No Mo