Posted on November 18, 2019 by Campaign Outsider

Well the Missus and I trundled west the other day to check out the – five, count ’em five – Springfield Museums and say, the exhibits were swell.

But their attribution? Not so much.

First we went to The Michele and Donald D’Amour Museum of Fine Arts, whose first floor features BAUHAUS: 100 Years Later (through February 16). Of all the 100th anniversary Bauhaus exhibits we’ve seen this year, this just might be our favorite.

No art school had a more influential or lasting impact on 20th century art and design than the Bauhaus. Founded in 1919 by the German architect Walter Gropius (1883-1969), the Bauhaus’

curriculum aimed to unite fine art, architecture, design and craft with the goal of creating functional art that could be incorporated into to daily life. Today, the streamlined designs and forward-looking aesthetic of the Bauhaus continues to inspire creative minds. This exhibition showcases work by major figures such as Josef Albers (1888-1976), Johannes Itten (1888–1967), Wassily Kandinsky (1866-1944), Oskar Schlemmer (1888-1943), and others who were involved with the school between 1919 and 1933.

The only acknowledgement by the museum of the exhibit’s source seems to be this single sentence in a press release: “Many of the pieces that will be displayed were donated by Springfield attorney and art collector Abraham Kamberg.”

By “many” the museum means “all but two” as far as we could tell. But there’s no mention of Kamberg in the wall text, just “Gift of Alma and Abraham Kamberg” at the bottom of the labels alongside each work.

The second floor houses The Art of Observation: The Best of Photographer Elliott Erwitt (through January 12), a eye-popping collection of the fabled streetscape shutterbug’s snapshots.

With a storied career spanning over six decades, photographer Elliott Erwitt (born 1928) is responsible for some of the most iconic images of the 20th century. Born in Paris, France, Erwitt

immigrated to the United States at a young age. In his twenties, Erwitt became acquainted with Edward Steichen (1879-1973) and his work was featured in the seminal Museum of Modern Art exhibition titled Family of Man . . .  Although Elliott Erwitt famously captured major public figures like Marilyn Monroe, Jackie Kennedy, and more recently Barack and Michelle Obama, he is also known for his ability to reveal the extraordinary in the everyday. Clever framing, insightful visual parallels, and the ability to capture pivotal moments characterize what Erwitt called the “art of observation.” 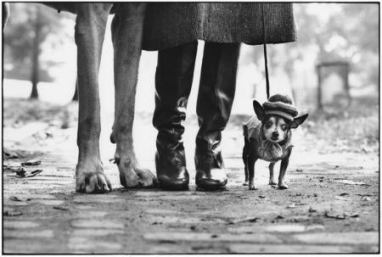 (A great story goes with that last photo: Erwitt shot it while traveling in Provence with legendary adman Bill Bernbach. The man on the bike was their driver. I forget where the kid came from. They rode down the road dozens of times until Erwitt got the shot he wanted. The rock you see alongside the bike signaled to the kid when to look back at the camera.)

What it fails to note is that all 90 (as far as I could tell) come from the collection of Richard Coplan, who receives no mention in the wall text or the museum’s press release, only the last line of the photographs’ labels.

To be sure, I don’t know the details behind the exhibits or their presentation. But I’ll send this post to the Springfield Museums press relations folks to see if they can enlighten me.

P.S. The Missus and I also dropped by the Wood Museum of Springfield History to catch Sweet: A Tasty Journey (Subhead: Unwrap the origins of our candy cravings!) and yes, it is 1) very tasty and 2) there through April 26.