Posted on January 11, 2019 by Campaign Outsider 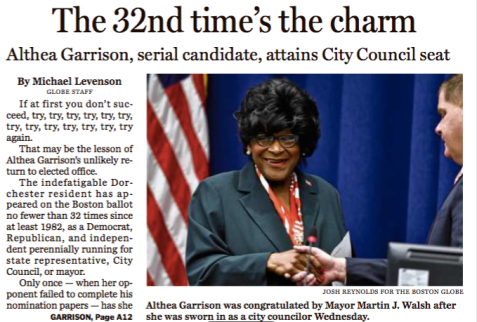 Before serving as a state representative from 1993 to 1995, she was outed as transgender when the Boston Herald got hold of a birth certificate that listed her sex as male and her name as A.C.

Though regarded by LGBTQ advocates as the first known transgender person to serve in a legislature, she was mocked by the Herald for her physical appearance and has declined over the years to discuss her gender identity.

It’s totally understandable why Garrison would decline to discuss her gender identity.

But it’s totally mystifying why local media outlets would do the same.

Say what you will, but Garrison’s elevation to the Boston City Council is a historic first.

So how come Boston’s media outlets aren’t treating it that way?

Bad form, you all.