Posted on October 26, 2018 by Campaign Outsider

Patricia Leigh Brown’s New York Times piece the other day about the Hearst Castle in San Simeon was interesting in its own right.

Taking a Dip at Xanadu

Guests swim at Hearst Castle, where Hollywood luminaries one cavorted.

SAN SIMEON, Calif. — It was the ultimate pool party. The benefit “V.I.P. Swim Experience” in the Neptune Pool at Hearst Castle here started with a troupe of Esther Williams look-alikes in matching white bathing caps and lipstick-red halter suits doing fan dives off the marble steps of the pool’s signature Roman Temple beneath a heroic pediment of Neptune.

As day descended into night, it was the bucket list set’s turn, as guests who paid more than $1,000 for the real-life fantasy of swimming in the Neptune Pool plunged into 345,000 gallons of frigid nirvana designed for the publishing tycoon William Randolph Hearst.

Then again, one man’s bucket is another man’s madeleine:

Thirtysome years ago, my boss at the time, thinking I was on the verge of quitting his ad agency, sent me and the Missus on a deluxe, all-expenses-paid trip down the California coast from San Francisco to LA.

About halfway through our Golden State jaunt, we encountered the two highlights of the trip: the Hearst Castle and the Madonna Inn, both located in San Luis Obispo.

First stop was the Madonna Inn, which boasts “110 whimsical guestrooms, each with their own unique charm and decor.” We stayed in the Highway Suite, described thusly by the hotel’s website.

Alex Madonna’s passion was heavy construction… building highways throughout California. The “Highway Suite” commemorates several job sites with personal photo’s sharing this facet of his life. The large stone boulders featured in the fireplace were recovered from local highway construction projects adding to the novelty of this room. Natural rock is also used in the shower to compliment the theme.

Not to mention complement it. (Alex Madonna’s descendants are clearly not passionate about grammar.) Either way, we dubbed it the Clan of the Cave Bear Room.

Next morning it was off bright and early to the Hearst Castle, where the Missus – a certified cinema junkie – wanted to take all four tours.

Of course, it wasn’t as simple as that. 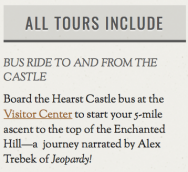 After the first tour, the Missus said to the bus driver, “We’re all in for the other three tours, so can we just stay up here and catch the next one?”

The bus driver very sweetly said, “No. You have to go back down to go back up.”

And it was worth every minute.

P.S. Not long afterward, I did quit that ad agency. As the bus driver said, you have to go back down to go back up.