Well the Missus and I trundled down to the Big Town the other weekend to see what we could see and say, it was . . . cold. But the artwork was swell.

We hit the city around three o’clock and headed down to the Whitney Museum to catch Grant Wood: American Gothic and Other Fables (through June 10). 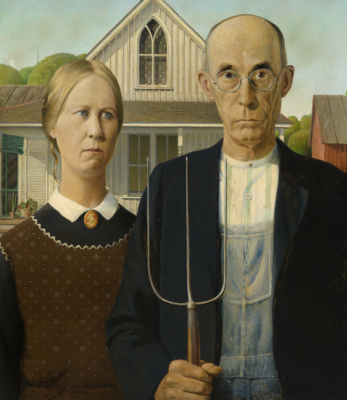 But there’s more to the artist than one painting of what’s routinely referred to as a Midwestern couple but which was really meant to depict a father and daughter. (In real life it was Wood’s sister and his dentist.)

Grant Wood: American Gothic and Other Fables brings together the full range of his art, from his early Arts and Crafts 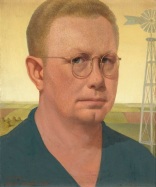 decorative objects and Impressionist oils through his mature paintings, murals, and book illustrations. The exhibition reveals a complex, sophisticated artist whose image as a farmer-painter was as mythical as the fables he depicted in his art. Wood sought pictorially to fashion a world of harmony and prosperity that would answer America’s need for reassurance at a time of economic and social upheaval occasioned by the Depression. Yet underneath its bucolic exterior, his art reflects the anxiety of being an artist and a deeply repressed homosexual in the Midwest in the 1930s.

We liked some of his Arts and Crafts work, such as this corncob chandelier he designed for a number of hotels. 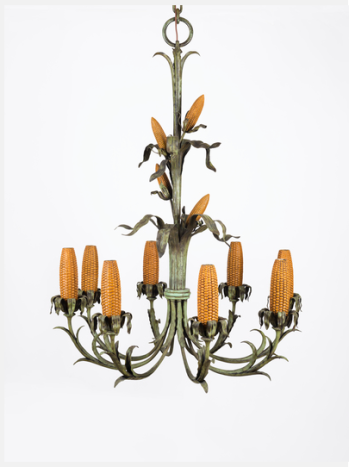 We also got a kick out of Wood’s Lilies of the Alley series.

Wood’s paintings over the course of his career ranged from Impressionistic works to starkly realistic portraits to often-dreamy landscapes. But they’re clearly not to everyone’s taste.

[Wood] was a strange man who made occasionally impressive, predominantly weird, sometimes god-awful art in thrall to a programmatic sense of mission: to exalt rural America in a manner adapted from Flemish Old Masters. “American Gothic” . . . made Wood, at the onset of his maturity as an artist, a national celebrity, and the attendant pressures pretty well wrecked him. I came away from the show with a sense of waste and sadness.

From there we moseyed up to The Museum at FIT for something completely different, starting with Norell: Dean of American Fashion (through April 14), a knockout retrospective tracing the career of Norman Norell, “one of the greatest fashion designers of the mid-twentieth century . . . best remembered for redefining sleek, sophisticated, American glamour.”

Also currently showing is The Body: Fashion and Physique (through May 5), a typically workmanlike FIT exhibit, and Pockets to Purses: Fashion + Function (through March 31), which is a total hoot.

Gives a whole new dimension to keep it under your hat, eh?

Saturday morning we bussed up to the Museum of the City of New York with the intention of doing the Museum Mile in reverse. First stop was Mod New York: Fashion Takes a Trip (through April 1). Talk about the Wayback Machine.

New York on Ice: Skating in the City (through April 15) was also a delightful walk down Memory Lane, while New York Silver, Then and Now (through July 1) was, well, sterling.

New York Silver, Then and Now links the rich history of

The Museum’s holdings, widely recognized as one of the foremost collections of American silver in the nation, include leading examples of silver designed and produced in New York

from the mid-17th through the 20th century. Comprised of more than 1,800 works by such notable craftsmen as Cornelius Kierstede, Myer Myers, and Charles LeRoux , and renowned retailer/manufacturers like Black, Starr & Frost and Tiffany & Co., the collection demonstrates how, for over four centuries, the city’s silversmiths and designers have adapted international styles to make them distinctively “New York” in look and feel.

You can get a behind-the-scenes look at the exhibition here.

From MCNY we dropped down to the Jewish Museum for Veiled Meanings: Fashioning Jewish Dress, from the Collection of The Israel Museum, Jerusalem which frankly I didn’t get because I have a goyishe kop. Then again, it doesn’t really matter because the exhibit closed yesterday.

Well worth seeing, though, is Scenes from the Collection, “a new, major exhibition of the Jewish Museum’s unparalleled collection featuring nearly 600 works from antiquities to contemporary art — many of which will be on view for the first time.”

Among those works, there was Mel Bochner’s The Joys of Yiddish. 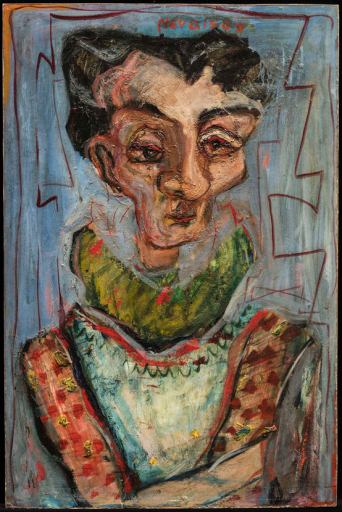 Plus 59o-something other absorbing works.

Absorbing in a very different way was the Cooper Hewitt’s main exhibit, Access + Ability (through September 3).

There has been a surge of design with and by people with a wide range of physical, cognitive, and sensory abilities. Fueled by advances in research, technology, and fabrication, this proliferation of functional, life-enhancing products is creating unprecedented access in homes, schools, workplaces, and the world at large. Access+Ability features over 70 innovative designs developed in the last decade. From low-tech products that assist with daily routines to the newest technologies, the exhibition explores how users and designers are expanding and adapting accessible products and solutions in ways previously unimaginable.

From there it was on to the Neue Galerie for Before the Fall: German and Austrian Art of the 1930s (through May 28).

This exhibition, comprised of nearly 150 paintings and works on paper, [traces] the many routes traveled by German and

Austrian artists and [demonstrates] the artistic developments that foreshadowed, reflected, and accompanied the beginning of World War II. Central topics of the exhibition [are] the reaction of the artists towards their historical circumstances, the development of style with regard to the appropriation of various artistic idioms, the personal fate of artists, and major political events that shaped the era.

The Missus’s description: “As someone who loves German Expressionism, I think this exhibit is creepy and not very good.”

Our last marker on the Museum Mile was the Met, where we made a beeline for Birds of a Feather: Joseph Cornell’s Homage to Juan Gris (through April 15), ” 18 boxes, two collages, and one sand tray created in homage to Juan Gris, whom [Cornell] called a ‘warm fraternal spirit.'”

The Man at the Café is the largest collage by Gris, and the only one to feature a human figure. Inspired by the fictional criminal mastermind Fantômas, popular in serial novels and silent films, Gris humorously captured a shady character hiding his face, his fedora casting an ominous shadow. The newspaper article, cut and pasted from Le Matin, reads, “One will no longer be able to make fake works of art,” although Gris himself attempted to trick the eye with the wood-grain paneling of the café interior.

Cornell’s Gris boxes include various collage materials that mimic this image: the French newsprint and mastheads, trompe l’oeil wood grain, and black cut-paper silhouettes. They also subtly reiterate the blue, yellow, and orange accents. The white plumage of the cockatoo that inhabits these boxes even “parrots” the brimming foam of the man’s beer.

As with much of Cornell’s work, it was both engaging and engrossing.

While we’re doubling our adjectives, Golden Kingdoms: Luxury and Legacy in the Ancient Americas (through May 28) was both exhaustive and exhausting. Pack a lunch.

On the other hand, Quicksilver Brilliance: Adolf de Meyer Photographs (through April 4) was a bit of high tea.

A member of the “international set” in fin-de-siècle Europe, Baron Adolf de Meyer (1868–1946) was also a pioneering

photographer, known for creating works that transformed reality into a beautiful fantasy. Quicksilver Brilliance is the first museum exhibition devoted to the artist in more than 20 years and the first ever at The Met. Some 40 works, drawn entirely from The Met collection, demonstrate the impressive breadth of his career.

Drawn from seven curatorial departments at The Met and supplemented by a selection of private collection loans, Public Parks, Private Gardens: Paris to Provence [features] some 150 works by more than 70 artists, spanning the late eighteenth through early twentieth century. Anchored by Impressionist scenes of outdoor leisure, the presentation will offer a fresh, multisided perspective on best-known and hidden treasures housed in a Museum that took root in a park: namely, New York’s Central Park, which was designed in the spirit of Parisian public parks of the same period.

Including one of our favorites, Parc Monceau (here by Claude Monet).

From there we drifted down to our coffee shop of choice, The Red Flame, miles away from the Museum Mile.

On the way back to Boston we swung by Hartford’s Wadsworth Atheneum to catch Gorey’s Worlds (through May 6).

For more than 50 years, Edward Gorey’s spare pen and ink drawings illustrating tales of hapless children, kohl-eyed swooning maidens, and whimsical creatures have delighted and amused audiences. Gorey’s Worlds is the first museum exhibition to explore the artistic inspiration of the famed American artist and author by presenting his personal art collection alongside art of his own creation.

Gorey’s Worlds is centered on his personal art collection, which he chose to bequeath to the Wadsworth Atheneum Museum of Art, the only public institution to receive his legacy. Gorey held the institution in high regard for reasons including a shared connection to the ballet and famed choreographer George Balanchine, whose histories date back to 1933 at the Wadsworth Atheneum. When Gorey lived in New York City, he attended nearly every performance of the New York City Ballet under Balanchine’s direction from 1953-1983, and he frequently stopped in Hartford when traveling between the city and his Cape Cod house in Yarmouth Port.

The exhibit was, well, peculiar. But worth seeing regardless.