If the hardworking staff has told you once, we’ve told you one time that the name of Rocket J. Squirrel’s sidekick is Bullwinkle T. Moose.

The death of the great June Foray, who voiced Rocky, has resurfaced the issue. Before we get to that, though, respeck for the First Lady of Animated Voicing, via her New York Times obituary.

Often compared to Mel Blanc, the cartoon virtuoso who supplied the voices of Bugs Bunny, Daffy Duck and Porky Pig, Ms. Foray cackled, chirped, meowed and sometimes sang her way through nearly 300 animated productions, often playing several parts at once with quick shifts of accent, dialect and personality. Her work, unlike that of Mr. Blanc, was often uncredited, particularly in her early years . . .

“June Foray is not the female Mel Blanc,” said Chuck Jones, the legendary animator who proposed her star on Hollywood’s Walk of Fame. “Mel Blanc was the male June Foray.”

Unfortunately, Ms. Foray’s Associated Press obit (which ran in both the Boston Globe and the Boston Herald) included this paragraph.

Besides Bullwinkle J. Moose and Rocket J. Squirrel, the show featured such sequences as “Fractured Fairy Tales”; “Peabody’s Improbable History”; “Aesop and Son”; and “Adventures of Dudley Do- Right.”

We say emphatically he was Bullwinkle T. Moose.

You, of course, have questions.

Answer: First, it’s impossible to believe that the brilliant Jay Ward and Bill Scott would give two characters the same middle initial. Second, we can still hear – five decades later – Bullwinkle saying, T is for The(e). 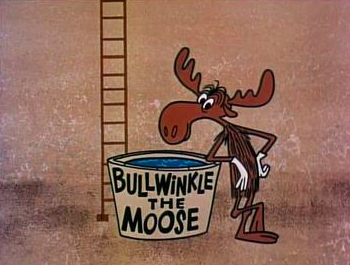 10 Responses to For the Last Time, People: It’s Bullwinkle T. (Not J.) Moose