As the hardworking staff has noted on several occasions, the New York Times has over the past few months jettisoned its “low-value line editing” and replaced it with “bespoke editing.”

Cashiered Times public editor Liz Spayd wrote earlier this year that the paper’s “editing architecture” has traditionally employed multiple layers of editors, with most stories blue-penciled by three editors, “with up to six or more if the article is headed for home page prominence or A1.”

After a bitter round of layoffs, though, you can pretty much cut those numbers in half.

The editing slashback has created enough of a rumpus that the Times published this piece by in-house historian David W. Dunlap in Tuesday’s print edition.

‘The Heart of a Newspaper’

As the deadline nears for Times newsroom employees to apply for a buyout, it is already clear that the elimination of free-standing copy desks will be a wrenching change.

Of course, it falls most heavily on the copy editors who were told they do not have a future at The Times. But in time, it will fall on just about everybody in the news department, as the responsibilities of copy reading are dispersed.

Whether readers are in for a wrenching change remains to be seen. The management of The Times believes that the editing process can be streamlined without jeopardizing the accuracy of the news report. Many employees are less optimistic.

Not to mention many readers, some of whom saw this in an online Business section piece Tuesday about Pharma Bro Martin Shkreli.

Except in the print edition the hardworking staff received on Tuesday, it looked like this. 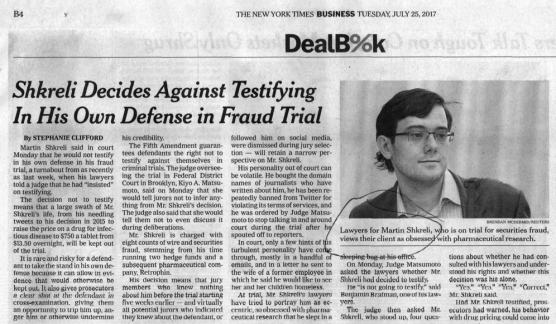 So does that mean the Times is now a print-second news organization?

On Tuesday, at least, it sure looked that way.

P.S. Before any of you splendid readers start bombarding me with barbed comments: No, the error above is certainly not earth-shattering, but it also was not the only example of sloppy editing in that edition of the newspaper – or any edition lately.