As the hardtsking staff has diligently noted lo these many years, Rick Berman is a hired gun American corporations use to fight labor unions, public-health advocates, and consumer, safety, animal welfare, and environmental groups, according to Citizens for Responsibility and Ethics in Washington, or CREW, an unabashedly left-leaning organization.

Yesterday’s Wall Street Journal featured yet another instance of Berman’s wet work, in the form of this op-ed.

Honey, I Shrunk the Union

The Service Employees International Union last week held yet another national protest. The “racial justice-themed Fight for $15 day of action” spread to dozens of cities but failed to live up to the hype.

A few dozen people showed up in Boston. The turnout appeared even smaller in San Diego. The Chicago Coalition for the Homeless tweeted a picture of “16 homeless workers.” The union should be embarrassed. Ignore the SEIU’s political theatrics and Potemkin protests, and you’ll find a cash-strapped group waging a losing war. 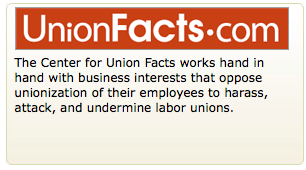 So, to the point here.

The Wall Street Journal should have disclosed Rick Berman’s financial interest in the failure of SEIU’s fight for a $15 minimum wage.

Then again, the Journal has been suckered by Berman before.