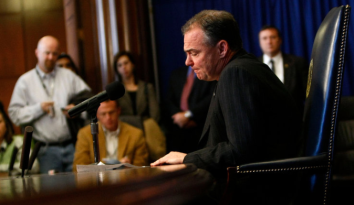 Kevin Green’s lawyers were pleading with the governor for mercy.

It was spring 2008, and Mr. Green, a 31-year-old who had shot and killed a grocery owner, was on Virginia’s death row. His woes, his lawyers said, dated to childhood; he was born with his umbilical cord wrapped around his neck, repeated three years of elementary school and never learned to tie his shoes.

His was precisely the kind of execution a young Tim Kaine, a Harvard-educated lawyer with a deeply felt revulsion for capital punishment, would have worked himself to the bone to stop.

But Tim Kaine, a Virginia governor with a deeply felt attachment to political survival and ambition, wouldn’t. And so . . .

[O]n the night of May 27, Mr. Green was led into the execution chamber at the Greensville Correctional Center, strapped to a gurney and hooked up to intravenous lines.

Shortly after 10 p.m., he became the fifth person put to death while Mr. Kaine was the governor of Virginia.

That calls to mind an episode two decades ago with Hillary Clinton’s real-life mate. In 1992, Bill Clinton faced a similar choice, with similar results. Here’s Christopher Hitchens’ recounting of the story in a 1999 UK Observer piece.

In January 1992 Clinton quit the thick of the New Hampshire primary to fly to Arkansas and give personal supervision to the execution of Rickey Ray Rector. Rector was a black lumpen failure, convicted of a double murder, who had shot himself in the head on arrest and achieved the same result as a frontal lobotomy would have done. He understood his charge and trial and sentence not at all. After a decade on Death Row his execution number came up in a week when Clinton, according to one report of the polls, had lost 12 points as a result of the Gennifer Flowers disclosures. These two ‘numbers’ were made to intersect. In 1988, Clinton had backed the ludicrous presidential campaign of Michael Dukakis, who had suffered from a sleazy ‘subliminal’ campaign about a dusky parole-breaking rapist named Willie Horton. In the week of the Flowers revelations, Time magazine helpfully inquired: ‘Suppose Clinton does sew up the nomination by mid-March and the Republicans discover a Willie Horton in his background?’ Rickey Ray Rector was the perfect rebuttal to such annoying speculations.

The coda: “Served his traditional last meal, Rector had left the pecan pie on the side of the tray, as he explained to his queasy guards, ‘for later’.”

So Tim Kaine is déjà veep. In the movie Gilda, Rita Hayworth in the title role says to her first husband, “You wouldn’t think one woman could marry two insane men in one lifetime, now would you?”

Fill in the rest yourself.