Posted on November 30, 2015 by Campaign Outsider

The terrorist attacks on Paris earlier this month have unleashed a predictable raft of TV spots from Republican presidential candidates trying to out-tough each other on homeland security.

The common denominator? Terrorists with rocket launchers in pickup trucks.

That image is mentioned no less than three times in Nick Corasaniti’s New York Times piece over the weekend. 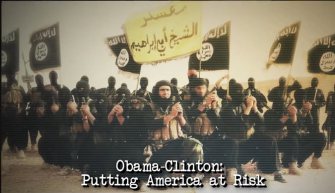 The terrorist attacks in Paris immediately changed the course of the presidential race as national security and foreign policy rose to the top of stump speeches and television interviews.

Now, the campaigns and outside groups are starting to feel comfortable running political advertisements about the attacks, darkening the holiday-season tone of commercial breaks in early voting states with messages tinged with fear and images of terrorist camps and Islamic State recruits.

It is a delicate line, one that the campaigns are aware of as they navigate politicizing a tragedy. But in a Republican race dominated by two outsider candidates, Donald J. Trump and Ben Carson, a tragedy like the attacks in Paris is giving candidates who have experience in public office an opening to highlight their national security credentials.