Posted on October 24, 2015 by Campaign Outsider

Fact #1: This Sunday, Yahoo will live-stream from London an NFL game between the Buffalo Bills and Jacksonville Jaguars.

Fact #2: Yahoo has sold ads during the game to over 30 advertisers.

Fact #3: A Toyota advertising executive apparently (we don’t want to say lied) misled the  New York Times about the cost of the ads.

Advertisers Flock To N.F.L. on Yahoo 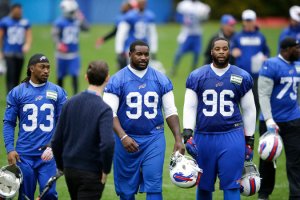 Jack Hollis, group vice president for marketing at Toyota Motors in the United States, did not want the automaker to miss. He did not care much about audience projections. He just wanted Toyota to be part of it, and agreed to buy commercial time almost as soon as Yahoo announced its deal with the National Football League.

“You don’t get a chance to be part of firsts very often,” Mr. Hollis said. “And, from a Toyota standpoint, I like to be part of historic firsts. And as a process of our partnerships with Yahoo and the N.F.L., it was an easy decision.” Toyota will sponsor the game’s halftime show and Dairy Queen is sponsoring the pregame show.

Yahoo announced on Thursday that more than 30 advertisers would present spots during the game and that the webcast was sold out. It did not reveal the cost of the ads, but Mr. Hollis said it was comparable to the price of commercial time on traditional televised N.F.L. games.

That’s not even close to being true.

According to APM’s Marketplace:

Showing an NFL game at 9:30 on a Sunday morning, from London, online-only is an experiment. Which may explain why the cost for a 30 second ad during the game is reportedly $50,000. Or, according to Michael Leeds, a sports economist at Temple University, “very low.”

The same ad, noted Leeds, during Sunday afternoon football on TV could cost 14 times as much.

In other words, Toyota’s Jack Hollis sold the New York Times a lemon.