Posted on September 13, 2015 by Campaign Outsider

Friday’s Wall Street Journal featured the latest in the paper’s terrific Anatomy  of a Song series: this installment by Marc Myers.

‘They Call Alabama The Crimson Tide’ 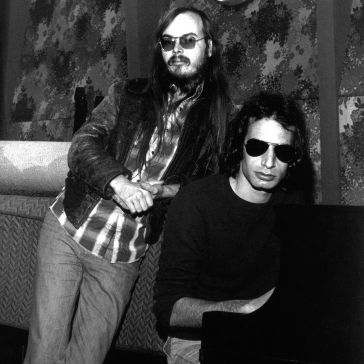 As midlife-crisis songs go, Steely Dan’s “Deacon Blues” ranks among the most melodic and existential. Recorded for the album “Aja” in 1977, the song details the bored existence of a ground-down suburbanite and his romantic fantasy of life as a jazz saxophonist.

Written by Walter Becker and Donald Fagen in 1976, “Deacon Blues” was released in 1977 on Steely Dan’s album “Aja,” which in the fall reached No. 3 on Billboard’s album chart, where it remained for seven consecutive weeks. The song also was a hit single in early 1978.

For starters, here’s the song itself, with lyrics helpfully provided by Unite against WMG (no idea).

Donald Fagen: Walter and I wrote “Deacon Blues” in Malibu, Calif., when we lived out there. Walter would come over to my place and we’d sit at the piano. I had an idea for a chorus: If a college football team like the University of Alabama could have a grandiose name like the “Crimson Tide,” the nerds and losers should be entitled to a grandiose name as well.

Walter Becker: Donald had a house that sat on top of a sand dune with a small room with a piano. From the window, you could see the Pacific in between the other houses. “Crimson Tide” didn’t mean anything to us except the exaggerated grandiosity that’s bestowed on winners. “Deacon Blues” was the equivalent for the loser in our song.

And whence the name “Deacon Blues”? According to conventional wisdom (and Unite against WMG, misspellings and all), it’s this:

Actually, not so much.

Mr. Fagen: When Walter came over, we started on the music, then started filling in more lyrics to fit the story. At that time, there had been a lineman with the Los Angeles Rams and the San Diego Chargers, Deacon Jones. We weren’t serious football fans, but Deacon Jones’s name was in the news a lot in the 1960s and early ‘70s, and we liked how it sounded. It also had two syllables, which was convenient, like “Crimson.” The name had nothing to do with Wake Forest’s Demon Deacons or any other team with a losing record. The only Deacon I was familiar with in football at the time was Deacon Jones.

Glad we got that sorted.

The rest of the Journal piece is a great ride.

We strongly recommend you take it.