Well the Missus and I trundled out to the DeCordova Sculpture Park and Museum yesterday to catch the Walking Sculpture 1967-2015 exhibit and say, it was swell.

Inspired by Michelangelo Pistoletto’s 1967 performance Walking Sculpture, in which the artist rolled a newspaper sphere through city streets in Turin, Italy, Walking Sculpture 1967–2015 features an international selection of artists who engage in walking as an autonomous form of art, as cartography, as an exploration of physical experience, and as social practice. Pistoletto’s walking performance was an act of dissonance against both traditional methods of art-making and behavioral norms. In the same spirit, Walking Sculpture 1967–2015 considers artists’ use of this elemental and often overlooked act as a poetic means for questioning established conventions of seeing and thinking.

Here’s a recreation of his Walking Sculpture that Pistoletto performed for a 2010 Philadelphia Museum of Art exhibit.

Another early work is Bruce Nauman’s “Walking in a Exaggerated Manner Around the Perimeter of a Square” from 1967-68.

We were lucky enough to have splendid tour guide Ellen Sturtevant walk us through the exhibit, which made our visit much more enjoyable (not to mention understandable).

The exhibit features sculpture, video, photography, and performance art. One of our favorites was the artist kanarinka’s work, It takes 156,000 breaths to evacuate Boston.

In Spring 2007, kanarinka ran the entire evacuation route system in Boston and measured its distance in breaths. The project is an attempt to measure our post-9/11 collective fear in the individual breaths that it takes to traverse these new 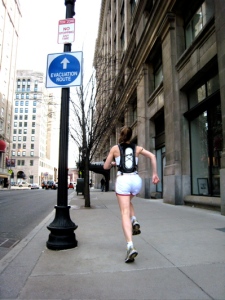 The $827,500 Boston emergency evacuation system was installed in 2006 to demonstrate the city’s preparedness for evacuating people in snowstorms, hurricanes, infrastructure failures, fires and/or terrorist attacks.

It takes 154,000 breaths to evacuate Boston consists of a series of running performances in public space (2007), a web podcast of breaths (2007), and a gallery installation of the archive of breaths (2008).

You really have to see (and hear) it.

The deCordova is closed tomorrow for the Fourth, but it’s open Sunday, with a museum tour at 2.

If Ellen Sturtevant is leading it, tell her we say hi.

This entry was posted in Uncategorized and tagged "Walking in a Exaggerated Manner Around the Perimeter of a Square", Bruce Nauman, DeCordova Sculpture Park and Museum, Ellen Sturtevant, It takes 156000 breaths to evacuate Boston, kanarinka, Michelangelo Pistoletto, Philadelphia Museum of Art, Walking Sculpture, Walking Sculpture 1967. Bookmark the permalink.

2 Responses to Dead Blogging ‘Walking Sculpture’ at the DeCordova