Why Tom Stoppard Is Right to Be a Snob

Several months ago British playwright Tom Stoppard created a tempest in a theaterpot with an interview he gave to the Telegraph.

Quiz: Are Tom Stoppard’s plays too clever for you?

As the playwright says he has to dumb down his jokes for today’s theatregoers, pit yourself against Tom Stoppard’s fearsome intellect with this quiz

The plays of Tom Stoppard are known as much for the scope of their themes and ideas as his dazzling wordplay and the uncompromising intellectual leaps required of the audience.

For The Hard Problem – the first play from theatreland’s philosopher king in almost a decade – he has tackled the mysteries of the mind and the nature of consciousness. But he claims to have “dumbed down” some lines, removing key historic, literary and scientific references in order that his play’s message is better understood by today’s theatregoers.

Critic Terry Teachout picked up on the picky Stoppard in the Weekend Wall Street Journal.

Why Is Tom Stoppard So Condescending? 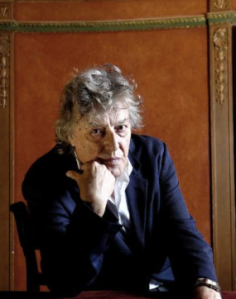 to understand his plays. In a February interview with the Telegraph that was occasioned by the National Theatre’s London premiere of “The Hard Problem,” his latest play, Mr. Stoppard complained that he now has to water down his punch lines: “It’s very rare to connect an audience except on a level which is lower than you would want to connect them on….You could raise it a notch and you might lose an eighth of them….I really resent it.” By way of illustration, he mentioned a scene in “Travesties,” one of his earlier plays, that contains a joke which hinges on knowing the name of Goneril, King Lear’s oldest daughter. “In 1974,” he said, “everybody in the audience knew who Goneril was and laughed. In about 1990 when the play was revived, maybe half knew.”

But that’s okay, Teachout notes, according to some of this generation’s educators.

Just the other day, the Washington Post published a rant by Dana Dusbiber, who teaches English at an inner-city school in Sacramento, Calif. Not only does Ms. Dusbiber happily admit to “disliking” Shakespeare, but she wants to “leave Shakespeare out of the English curriculum entirely.” Her preferred replacement is “the oral tradition out of Africa, which includes an equally relevant commentary on human behavior.” She believes that Shakespeare’s plays are no longer relevant to the lives of the “students of color” whom she teaches: “Shakespeare lived in a pretty small world. It might now be appropriate for us to acknowledge him as chronicler of life as he saw it 450 years ago and leave it at that.”

Except, as Teachout writes,”[If] you’ve never seen or read, say, ‘Hamlet,’ then you will be utterly incapable of understanding ‘Rosencrantz and Guildenstern Are Dead,’ the 1966 philosophical comedy in which Mr. Stoppard placed two of the minor characters from ‘Hamlet’ at center stage and built a coruscatingly brilliant, endlessly thought-provoking masterpiece around their absurd follies. It will be a closed book to you, one whose covers you’ll find it impossible to pry apart.”

As it happens, Rosencrantz and Guildenstern Are Dead is the first stage play I ever saw, back in the ’70s. And it was a coruscatingly brilliant, endlessly thought-provoking masterpiece. Its inside-out version of “Hamlet” was a total revelation, opening up a whole new literary landscape.

And it’s not just Tom Stoppard who suffers from the defining down of the English curriculum. A dozen years ago Slings & Arrows debuted on Canadian television. The series, which chronicled the trials and tribulations of the New Burbage Festival, ran for three fabulous seasons – one revolving around the Festival’s staging of “Hamlet,” one revolving around “Macbeth,” the final around “King Lear.”

It was absolutely stunning – funny, smart, beautifully written, superbly acted – everything you could want from an artistic work.

From Season 2, when the director Jeffrey changes the opening-night staging on the fly to shake up the egomaniacal, mail-it-in actor playing Macbeth.

A total hoot. (The actor cold-cocks Jeffrey when the play ends.)

There are maybe 17 American high school seniors who would get that episode.

And that’s a damn shame.