From our Late to the Going-Away Party desk

On Second Try, A Kingly Burial For Richard III

LEICESTER, England — For an English monarchy that has lasted more than 1,000 years, there can have been few more improbable occasions than the ceremony of remembrance here on Thursday for the reburial of one of the most bloodstained medieval sovereigns, King Richard III, who was slain in battle seven years before Christopher Columbus set sail for the New World.

After three days of viewing by thousands who lined up for hours to file past the bier in Leicester’s Anglican cathedral, Richard’s skeletal remains, in a coffin of golden English oak with an incised Yorkist rose and an inscription giving the sparest details of his life — “Richard III, 1452-1485” — were removed overnight from beneath a black cloth pall stitched with colorful images from his tumultuous times.

Who can forget his portrait of the Sarajevo cellist who unfolded his plastic chair and played Albinoni’s Adagio in the rubble of the decimated capital? The Afghan couple awaiting their stoning death at the hands of the Taliban, and the woman’s weeping son checking to see if she was still alive after the first hail of stones? It was John’s eye and heart that would not allow his readers to forget the suffering of people so far away, so seemingly unconnected to them.

At the end of yesterday’s piece, the Times posted this about Burns: 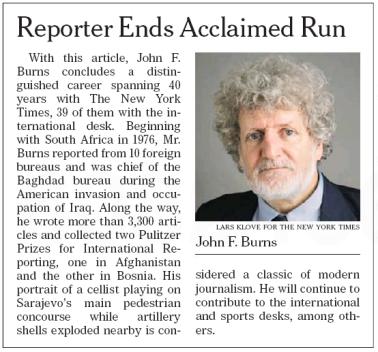 Burns went out on a wholly appropriate note, writing about what he knew so well: war, celebrity, and British society. It’s good that he’s not going far.