Posted on January 6, 2015 by Campaign Outsider

St. Ignatius Loyola Church, the Kim Kardashian of the Upper East Side that’s about to swallow the far more worship-worthy Church of St. Thomas More, is back in the news today.

(As the hardlapsing staff has previously noted, we were an indentured server at St. Thomas More in the 1960s.)

According to a statement from Andrew Cuomo’s office, a private funeral mass for Mario Cuomo will be held at 11 a.m. Tuesday at St. Ignatius Loyola Church on the Upper East Side. Visitors may call at the Frank Campbell Funeral Home at 1076 Madison Ave. in Manhattan from 1 to 5 p.m. and from 7 to 10 p.m. Monday.

First of all, the Frank Campbell Funeral Home has long been God’s halfway house for luminaries of all stripes.

Inside New York City’s funeral home to the stars

For the famous and infamous of New York City, 1076 Madison Ave., at 81st Street, is a mandatory stop.

For all of them, sadly, it’s the next to last stop.

It’s the headquarters of Frank E. Campbell, the ­“funeral director 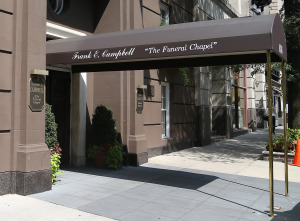 to the stars” whose most recent RIP VIP was comedy legend Joan Rivers, who died this month at 81 . . .

Toss in St. Ignatius and you have the deluxe Upper East Side sendoff.

Rest in peace with Leona Helmsley.