Posted on October 19, 2014 by Campaign Outsider

Well the Missus and I trundled over to Central Square yesterday to catch the Catalyst Collaborative production of A Disappearing Number and, say, it was . . . swellish.

In 1913 a clerk in rural India, Ramanujan, sends a letter to the renowned Cambridge mathematician, G.H. Hardy, containing an extraordinary series of theorems. What ensues is a 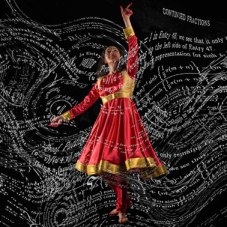 legendary, intellectually passionate, seven-year collaboration. Interwoven with the present-day story of Ruth, a British math professor, and her husband, an Indian-American businessman. Drama, comedy, Indian dance and music weave an immersive experience the New York Times called “mesmerizing”, a love-story that combines the clashes of culture, the sensuality of ideas, while illuminating the mystery of mathematics.

Unfortunately, we found the local production slightly less than mesmerizing – too long, too mathematical, and too . . . long. (Two hours, no intermission.)

That said, the performances by Harsh J. Gagoomal (as the physicist/narrator Aninda) and Christine Hamel (as the mathematician Ruth) are terrific, and the staging is ingenious and eye-catching throughout.