Posted on September 2, 2014 by Campaign Outsider

Major takeout on military hospitals on Page One of the New York Times today.

HINESVILLE, Ga. — Every year, more than 25,000 Americans undergo surgery to correct a hiatal hernia, a condition in which tissue from the stomach bulges into the chest cavity through a hole in the diaphragm. The hernias often return, but major complications are rare. Hospital stays are usually short.

Irene Smith, a 42-year-old cafeteria worker, wife of an Army sergeant and mother of three, was considered a good candidate for the procedure when she was evaluated in late 2007. A cardiologist’s report was especially positive. “Lost about 25 pounds, exercising daily, looks fantastic,” he wrote.

But more than a dozen operations later, Mrs. Smith has lost her stomach, her health, her job and almost all semblance of a normal life. She must purée most of her food. From her esophagus to her intestines, she is such a jumble of abnormalities that two years ago one specialist declined to treat even her chronic cough for fear of making her worse.

“I do not mean to be rude or disrespectful,” she recalled him saying, “but I would not touch you with a 10-foot pole.”

Most people who read this story would likely say the same of the 40 hospitals nationwide run by the armed forces. This is one sad/scary/sickening report. And at the end of it, there’s this (tip o’ the pixel to Politico Playbook): 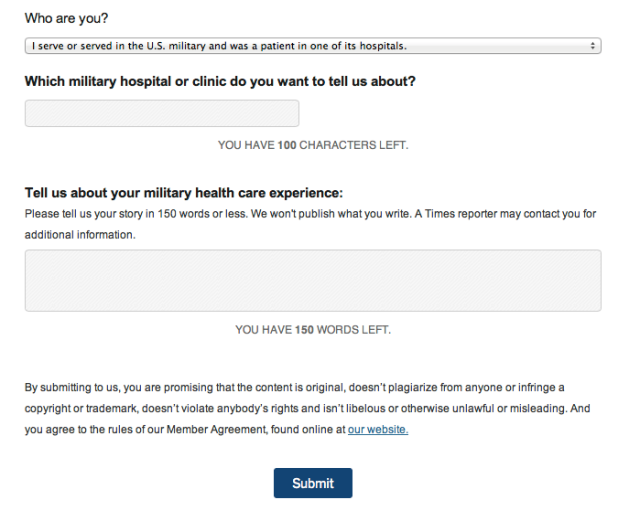 Politico calls it “reader-sourcing.” Be interesting to hear what the Public Editor calls it.