Posted on February 18, 2014 by Campaign Outsider

The Donald got blowtorched by BuzzFeed last week and, man, it was sweet.

[Donald] Trump can no longer escape the fact that his political 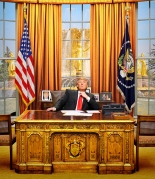 “career” — a long con that the blustery billionaire has perpetrated on the country for 25 years by repeatedly pretending to consider various runs for office, only to bail out after generating hundreds of headlines — finally appears to be on the brink of collapse.

The reason: Nobody seems to believe him anymore.

Believe this, though: Trump was livid about the BuzzFeed facial.

TRUMP FIRES AIDE OVER BUZZFEED DISS – N.Y. Post p. 15, “TRUMP: HE AXED FOR IT! Political aide out,” by Fredric U. Dicker and Frank Rosario: “Donald Trump couldn’t pass up the opportunity to say, ‘You’re fired’ to an underling — even when the man offered to resign. Furious over a snarky Buzzfeed article about his political aspirations, the developer … booted the adviser who had urged him to do the interview. ‘I told [Trump] when he fired me, “Sir, I’m willing to offer you my resignation.” He didn’t accept that,’ 32-year-old political consultant Sam Nunberg told The Post. But ‘this is not unfair, honestly … I failed Mr. Trump, and that’s the long and short of it.’

“Trump, 67, told The Post that he had first been approached by Buzzfeed writer McKay Coppins about possibly doing a sit-down interview … when the mogul was in New Hampshire. … ‘Sam said to me, “This guy is a friend of mine. It’s going to be a great story” … I said to Sam, “If this guy writes a fair story, that’s fine. But if he writes a wise-guy story, you’ll be fired.” And I said to Sam, “OK?” And Sam said, “OK.”’ Coppins’ scathingly critical story appeared last week under the title, ‘36 hours on the Fake Campaign Trail with Donald Trump.’ After the article appeared, … ‘I called [Nunberg] in and said, “Sam, you’re fired!”’”  http://goo.gl/CYbKuB

The thing is, Coppins provides absolutely no evidence that he’s any kind of friend to Nunberg. Throughout the piece Coppins refers to Nunberg as a Trump “yes man,” and he includes this kneecapping bio:

But it’s Nunberg, a solidly built Manhattan native who wears well-tailored suits and Trumpian ties, who seems to perfectly embody the Donald’s mischief-making brand of politics. His first foray into presidential campaigning came in 2007 when he worked as a volunteer for the Romney campaign while attending law school on Long Island. He was put in charge of organizing turnout for the New York City GOP straw poll; with a little bit of hustle and political voodoo, he managed to pull off an upset win for Romney over hometown hero Rudy Giuliani. (According to one source with knowledge of the incident, Nunberg paid voters cash to show up and vote for Mitt; Nunberg declined to comment.)

Nunberg went on to work as an opposition researcher, digging up dirt on the backers of the so-called “Ground Zero Mosque” in 2010. One day, while sitting in class, someone emailed him a Weekly Standard profile of the notorious Republican operative Roger Stone. The article described Stone as a “Nixon-era trickster” who blackmailed reporters [and] lied constantly to everybody . . . Nunberg had found his mentor — he now works for Stone’s consulting firm, which counts Trump among its clients.