Posted on January 24, 2014 by Campaign Outsider

First it was the death of Nelson Mandela. Then Chris Christie’s marathon presser in the George Washington Bridge rumpus. Now it’s Chet Curtis, rest his soul.

What do they have in common? All were missed by the Boston Herald’s Press Party, all because the Wayne’s World webcast is produced on Thursday instead of when it should be – on Friday.

Geez, guys – just rename the show DePress Party and be done with it, yeah?

Herself, of course, worked with Curtis for many years at WCVB, and she started her remembrance this way: “I’ve said this over the last couple of days, there is no one who was better at the ad lib than Chet Curtis, whether it was the Tall Ships or a ten-hour snowstorm or whatever it was . . . ”

That agility shone through in the Boston Globe’s memorials as well.

To WGBH-TV and radio host Emily Rooney, a former news 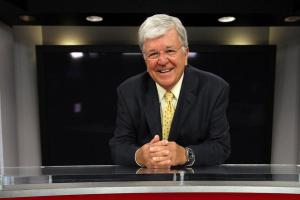 director at WCVB, the respect Mr. Curtis commanded among camera operators and studio crew “speaks volumes” about his professionalism. Beyond his personal likability, Rooney wrote in an e-mail, “There is no single human being in the world, Peter Jennings included, who was better at the ad lib than Chet.”

And here in the same piece:

[A] Globe profile called him “a solid reporter who could think on his feet, ad lib, and handle most any surprise that came across the desk.”

Chet was the most natural, earnest ad-libber I’ve seen on TV.

And here, in a Globe editorial:

Chet Curtis, who died Wednesday at 74 of pancreatic cancer, brought a comforting voice, a gentle spirit, and a talent for ad libbing to the job.

Final word: If Bernard Malamud had written a journalism novel rather than a baseball one, Chet Curtis would have been The Natural.