Posted on December 9, 2013 by Campaign Outsider

Well the Missus and I trundled out to the Rose Art Museum at Brandeis University the other day to catch Image Machine: Andy Warhol and Photography (through December 15) and, say, it was . . . interesting.

mass media and those he shot himself. Image Machine, which is drawn largely from the Rose Art Museum’s permanent collection, focuses on how Warhol used photography throughout his career as source material, medium, and subject matter. The phrase “image machine” refers to both the artist himself—he produced tens of thousands of photographs over his lifetime—and the technologies he employed. Warhol adopted the image-making machines of popular culture, including still cameras, movie cameras, and commercial silkscreen printing.

Especially appealing: Warhol’s 10 Portraits of Jews of the 20th Century. 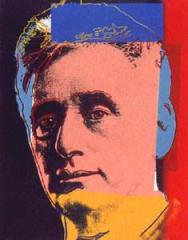 and the Marx Brothers: 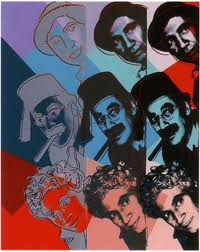 Here’s yet another basement-and-attic exhibit occasioned by these parlous times for art museums.

Catch it if you can.