Free The Bill Mauldin One!

From our Late to the Party desk

The Boston Sunday Globe featured this book review (dead-tree version) of The Deserters: A Hidden History of World War II, by Charles Glass: 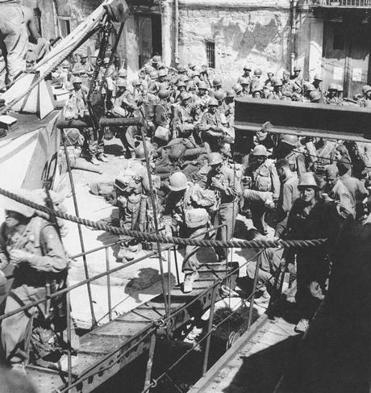 ‘The Guns at Last Light,’’ the concluding volume of Rick Atkinson’s magnificent Liberation Trilogy, is conquering the bestseller lists and will surely be the most lauded World War II title of the year. But “The Deserters: A Hidden History of World War II,’’ Charles Glass’s powerful and often startling new book, should not be overlooked. One of the best works of nonfiction I’ve reviewed this year, it offers a provokingly fresh angle on this most studied of conflicts.

Where Atkinson works on vast canvas, Glass, a former ABC Mideast correspondent, zeroes in on the stories of three infantrymen, two American and one British, who quit the ranks during their respective tours of duties as they fought in North Africa, Italy, and France. Fear, exhaustion, or outright disgust were the primary motivations for two; greed helped drive the third.

Matthew Price’s review proceeds to say that “[s]ome 150,000 British and American soldiers would desert over the course of the war. Though the deserters made up barely 1 percent of the combined forces, 8 out of every 10 came from combat units . . . ”

First, how many people under the age of 60 know who Willie and Joe are?

Second, who mentions Willie and Joe but fails to credit their creator?

Third, isn’t it an absolute shanda to link the quintessential American G.I.’s with deserters, however beleaguered the AWOL set might have been?

Willie and Joe are the creation of Bill Mauldin, who at the age of 22 went to the European theater to cover World War II and wound up drawing the definitive portrait of the American G.I.’s who fought there. 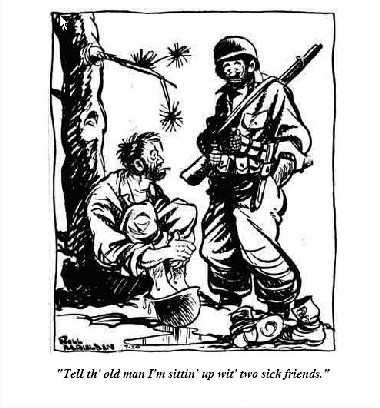 Willie and Joe represented all the “dogfaces” who slogged through the ground war and who loved Mauldin because he captured their daily life in excruciating detail while puncturing the pomposity of the military brass who had no idea what the grunts had to endure.

(The great WWII correspondent Ernie Pyle had the same relationship with American G.I.’s, as evidenced in this newspaper column:

Now to the infantry — the God-damned infantry, as they like to call themselves.

I love the infantry because they are the underdogs. They are the mud-rain-frost-and-wind boys. They have no comforts, and they even learn to live without the necessities. And in the end they are the guys that wars can’t be won without.

(Pyle also wrote one of the most moving columns ever about the loss of war:  The Death of Captain Waskow. Linda Hunt does a beautiful reading of it in the PBS documentary Reporting America at War.)

But back to Bill Mauldin. This cartoon in particular illustrates his brilliance in capturing the most basic – and most profound – truth of war:

Bill Mauldin was 22 when he drew that. And he won the first of his two Pulitzer Prizes for his Willie and Joe cartoons.

So why didn’t the Boston Sunday Globe give Mauldin his due?

2 Responses to Free The Bill Mauldin One!