Monday’s Wall Street Journal and Boston Globe front pages featured his and her versions of the damage visited upon the Norden family by the Boston Marathon bombings.

Boston Globe Page One (via the Globe’s ePaper): 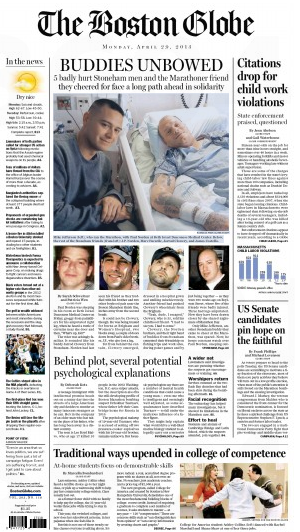 WSJ Page One (via The Newseum’s Today’s Front Pages):

Friends wounded at Marathon will recover together

Paul Norden was sleeping in his room at Beth Israel Deaconess Medical Center on Friday, groggy from painkillers for his amputated right leg, when he heard a rustle of curtains near the door and then, “What’s up, kid?”

The voice was achingly familiar. It sounded like his buddy Jarrod Clowery from Stoneham. Norden had last seen his friend as they huddled with his brother and two other boyhood pals near the Boston Marathon finish line, inches away from the second bomb.

It could not be Clowery, though. He was being treated for burns at Brigham and Women’s Hospital, two blocks away, a couple of doors down from Paul’s older brother, J.P., who also lost a leg.

Yet from behind the curtain, Clowery emerged, dressed in a hospital gown and smiling mischievously. Another friend had pushed Clowery’s wheelchair from the Brigham.

And he said this to his childhood friend: “Yeah, dude, I escaped. I had to see you. I had to come.”

Meanwhile, Liz Norden – the mother of Paul and J.P. – has to go.

From the WSJ story:

In Boston, Families Grapple With Long Road Ahead

Liz Norden has moved through each day since the Boston Marathon bombings on prayers, support from friends and just a few hours of sleep a night. She is in the shower by 4:30 a.m. and on the road soon after to beat the morning traffic into Boston.

All day and late into the night, she shuttles between two hospitals visiting her sons, J.P., 33 years old, and Paul, 31. The brothers are best friends who share a love of basketball. They have always lived near one another outside Boston, and both have worked as roofers since high school. Now, their bond has been deepened by tragedy: Each lost his right leg in the bombings.

Ms. Norden, 50, says she fights to stay upbeat, to “keep them believing.” When she feels tears coming, she ducks into a bathroom to cry. She is hopeful her sons will eventually resume full lives, but the road seems long and uncertain. “When it’s very quiet late at night, the reality sets in that life as we know it is over,” she says. “Honestly, it’s like a nightmare.”

God, these stories are sad. Feels like we owe it to the victims to read them.