During the past few days the Boston Herald has been relentlessly flogging its new Press Party webcast, which the hardworking staff guesses is an audition for NECN or Fox 25.

Here’s our feisty local tabloid’s “news coverage” of its own webut (web + debut): 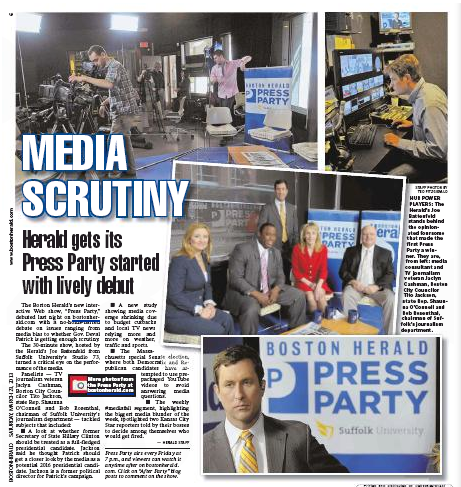 Herald Gets its Press Party started with lively debut – if it does say so itself.

Clearly this webcast (at 7 pm on Friday) wants to be an alternative to WGBH’s Beat the Press, which airs at the same time.

(Full disclosure: The hardworking staff was a longtime contributor to Beat the Press, but no more.)

You can see the Press Party segments here. (The Herald has unwisely declined to post them on YouTube.)

Crosstown at WGBH, Friday’s Beat the Press can be viewed here. (WGBH also appears to have – unwisely – shunned YouTube.)

So to the bakeoff: Which do you splendid readers think did a better job of deconstructing last week’s media coverage?

Ten-point bonus: Will our feisty local tabloid lean on Herald columnist Margery Eagan to abandon Beat the Press (where she is a regular) for Press Party?

4 Responses to Our Inaugural ‘Beat The Press Party’ Bakeoff