From our When Deval Picked Lizzy desk:

SOMERVILLE — Governor Deval Patrick, who had said he would not endorse in the Democratic Senate primary, threw his support behind Elizabeth Warren on Wednesday, seeking to boost her campaign as she faces continued questioning over her assertions of Native American heritage.

Patrick’s endorsement comes just three days before the Democratic convention in Springfield, where some Democrats are hoping to elbow aside Marisa DeFranco, a potential challenger to Warren, by ensuring she does not receive the 15 percent of delegates needed to earn a spot on the September primary ballot.

Massachusetts Republicans pointed out Patrick’s history of insisting he would not endorse in the midst of a contested primary and called his decision to do so now “a sign of deep panic and desperation in the Warren campaign.”

The Boston Herald’s front page called it something entirely different (via The Newseum’s Today’s Front Pages): 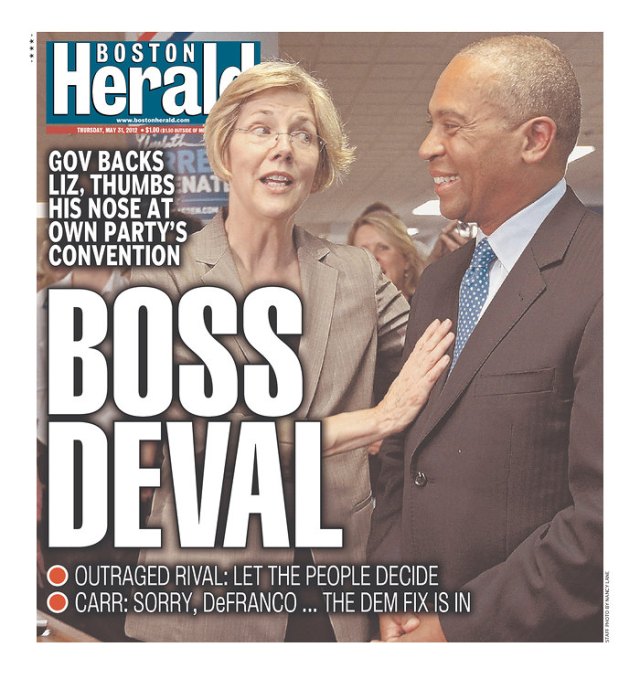 SOMERVILLE, Mass. — In a last-minute change of heart, Gov. Deval Patrick of Massachusetts, who said last year that he would stay neutral in the race against Senator Scott P. Brown until Democrats had settled on a candidate, endorsed the embattled Elizabeth Warrenon Wednesday.

The unexpected move, announced at a contentious news conference at Warren headquarters here, came just days before the state Democratic Partyis to hold its convention. Delegates are expected to back Ms. Warren, but they may also give enough support to another candidate, Marisa DeFranco, to allow her a spot on the September primary ballot to challenge Ms. Warren.

P.S. Don’t you love how Patrick and Warren lean exactly the same degree to the left in the photo?