A Chart Is Worth A Thousand Words

Posted on April 7, 2012 by Campaign Outsider

Trouble in Democratic FundraisingLand, via the Wall Street Journal and the New York Times.

After Bill Burton failed to win the job of White House press secretary last year, he took a position nobody else wanted—helping lead a super PAC to help re-elect the president.

At the time, President Barack Obama was openly hostile to super PAC fundraising for giving rich donors more influence. Now, Mr. Obama and senior advisers who passed over Mr. Burton are reliant on the 34-year-old Buffalo, N.Y., native to help them stay employed a second term.

So far, they have cause for worry. Mr. Burton’s super PAC, Priorities USA Action, and a companion nonprofit group was at the end of February about one-tenth of the way toward its goal of raising $100 million, struggling with inexperience and missteps against more successful super PACs supporting Republican candidates. 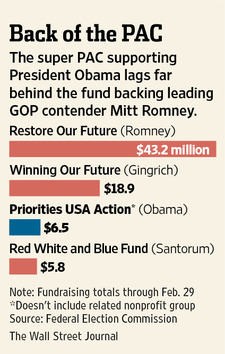 Once teetering on the edge of bankruptcy and irrelevance, theRepublican National Committee has raised more than $110 million over the past 15 months and retired more than half its debt, accumulating large cash reserves that could give Mitt Romney a critical boost later this spring as he intensifies his campaign against President Obama.

That far outstrips the Democratic National Committee, “which raised about $137 million during the same period but also spent far more.”

All of which puts the GOP in much better shape for what the Journal describes as the bottom line:

The Center for Responsive Politics, a nonpartisan group that tracks campaign spending, said both sides could raise as much as $6 billion for the 2012 election, including spending by super PACs and other outside groups. In 2008, the two sides spent $2.9 billion in the presidential race, the center said.

All those dollars and no sense, eh?