Posted on April 5, 2012 by Campaign Outsider

The local dailies make a mountain out of a Cahill, Day Two.

In politics, all the world’s a campaign stage, particularly for incumbents. Officeholders enjoy the unique advantage of regularly hitching their names to good works in newspaper and television ads, in government printings, at public events, all in the name of informing the public and all paid for with public dollars.

Now, with the indictment of former state treasurer Timothy P. Cahill on charges of misusing state lottery advertising to benefit his failed 2010 gubernatorial campaign, the question of what constitutes illegal campaigning and what constitutes legitimate promotion for the larger good is up for debate.

Legal specialists say that Cahill’s case could prove to be a particularly well-documented line-crossing. Prosecutors allege that e-mails and text messages show there was explicit coordination between Cahill and his campaign in planning ads that promoted the lottery, which Cahill oversaw as treasurer.

The corruption charges against Cahill all grow out of accusations that he used the Massachusetts State Lottery’s advertising budget to benefit his 2010 gubernatorial campaign. And what can a longtime Cahill observer say, really, except this: No big surprise there. And this: It looks like a solid case to me.

But not so much to Globe Metro columnist Brian McGrory, who ledes his latest column this way: “As I watched Martha Coakley announce criminal indictments against Tim Cahill this week, one simple thought kept banging around my head: This doesn’t feel right.”

At Monday’s news conference, Coakley was flanked by four grim-faced men, lawyers and a detective, who spent what Coakley herself described as “enormous amounts of time’’ on a 17-month investigation. They dedicated untold state resources to prove what anyone with a TV and a Barcalounger already knew: That some two-bit politician tried capitalizing on his office to win another election.

Was there really not a way to sanction Cahill civilly in a month-and-a-half, rather than criminally after a year-and-a-half? Are these charges worth all this time?

The case against the ex-treasurer is a test for a vaguely worded law that turns what used to be civil infractions into criminal activities. Tom Dwyer, a criminal defense lawyer and ex-prosecutor who specializes in white collar cases, argues that two sections of the ethics law used against Cahill were “never meant to apply to the conduct alleged in this case . . . I predict these charges will be dismissed without a trial.’’

It’s also a test for Coakley and what kind of crimes she brings to trial.

To wit: Coakley passed on prosecuting Big Dig contractors “for shoddy workmanship that resulted in a woman’s death,” and left prosecution of corrupt former Massachusetts House Speaker Sal DiMasi to the feds.

But Cahill Coakley drops the hammer on.

If, as charged, Cahill abused his office by using taxpayer money to coordinate ads, he should be held accountable. But when Massachusetts voters think of rooting out political corruption, are the charges against him what they have in mind?

This is a strong case of going after the weak. It’s harder to go after the powerful.

Crosstown at the Boston Herald, there’s nothing weak about the response to Coakley’s power play. Dan Small, a trial lawyer and former federal prosecutor, asks in an op-ed piece whether Coakley isn’t guilty of infractions similar to Cahill’s in her relentless promotion of the indictment.

Let’s end on a high note, with editorial cartoons from the two dailies. 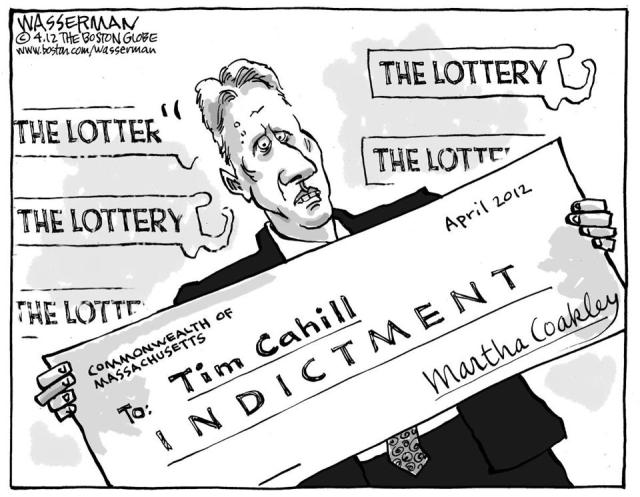 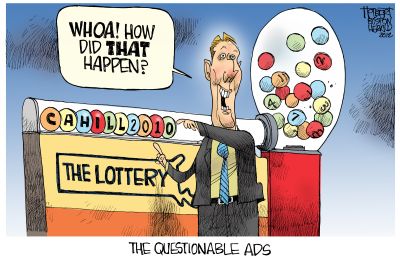 It’s good to live in a two-editorial-cartoon town.

Of which there are far too few.