Posted on February 16, 2011 by Campaign Outsider

From our Late to the Party desk:

Massachusetts House Speaker Robert DeLeo (D-Broken Ankle) has decided to goose his profile by cracking down on welfare abuse.

To wit (via the Boston Herald):

A frustrated House Speaker Robert A. DeLeo is cracking down on welfare card abuse after a Herald review found that Bay State recipients blew nearly $200,000 in taxpayer dough last year on a broad array of luxuries — including booze, lingerie, tanning parlors, jewelry, movie theaters and even pets.

About the only thing more idiotic was the Herald’s front page on Tuesday: 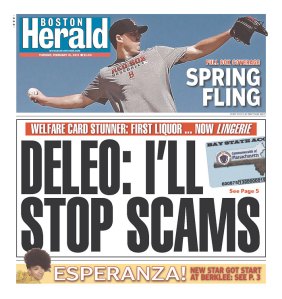 • $827 at Victoria’s Secret stores across the state, including $208 at a Hyannis outlet;

• $644 at beauty supply stores, salons, and even a tanning booth in Fall River.

If you ask the hardworking staff, the real story is how little welfare money goes toward those types of purchases.

But why get technical about it.