I Was So Wrong About Cincinnati’s Abandoned Subway System

I did seven years in Ohio from the late ’60s to the mid-’70s, as I’ve detailed elsewhere.

Ever since then I’ve believed three things I was told about the Cincinnati Subway System That Never Was.

1) It was built in the wrong direction – East/West, which would have been little used, instead of North/South, which those (largely minority) communities really needed;

2) The gauge track the builders laid did not match any subway cars that were being manufactured at the time;

3) To cut their losses, city officials rented the abandoned underground tunnels to the Canandaigua Winery for storage.

I arrived at those conclusions because my old pal cowboyjessejames sent me this Forbidden Explorer video of Cincinnati’s abandoned subway system. It was produced by The Proper People, “two friends, Bryan and Michael, who travel in search of abandoned buildings to explore and photograph.”

It’s a totally amazing ramble through the remnants of a ghost subway.

As Bryan and Michael relate early in the video, in 1916 80% of Cincinnati residents voted to replace a polluted canal running through the city with a subway system.

Ground was broken in 1920, and work proceeded for five years until the original six million dollar budget ran out. Once the Great Depression hit, the subway project was toast.

What remains became the target of Bryan and Michael’s exploration. “The main tunnel,” one of them tells us in the video, “runs for over two miles beneath the city and contains several complete stations. It follows the path of Central Parkway . . . ” 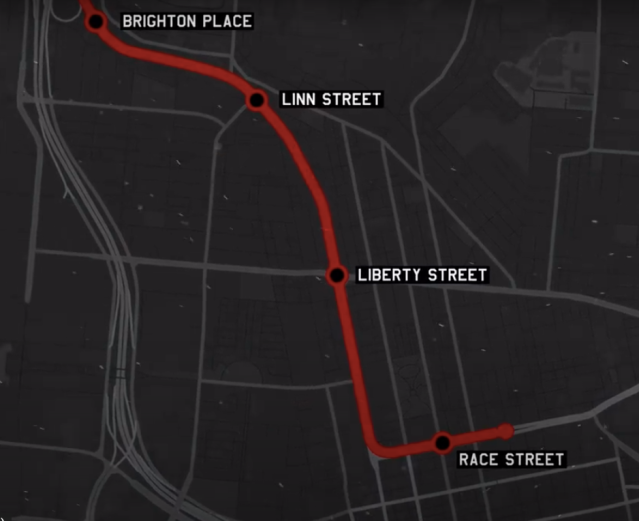 In 2017 the duo found a way into the tunnel and spent four hours walking through it and talking about what they saw. And what they saw was a lot of this.

Cincinnati officials might have abandoned the subway system, but the Queen City’s taggers certainly did not. This stretch is representative of the tunnel’s entire two miles. The Forbidden Explorer video, however, detailed much more than the post-abandonment graffiti in Cincinnati’s ghost subway, as over three million viewers have witnessed.

Interestingly, in 2016 – a year before the Proper Boys embarked on their tunnel trundle – Andrew J. Hawkins filed this monumental piece at The Verge, which starts out detailing Cincinnati’s anemic public transit system, then pivots to The Train to Nowhere.

Under the streets of Cincinnati lies the vestige of a different vision — sealed underneath heavy manholes, hidden behind ivy-draped steel gates, and kept out of the public eye by the city’s highest officials. This is the city’s abandoned subway system, nearly three miles of empty tunnels and platforms now decorated in dust and graffiti. It is a vast subterranean space that stands as a monument to one of the biggest transportation blunders of all time. Had it been completed, the rapid transit system could have transformed Cincinnati. Instead, a decade after the project broke ground it was canceled, never to be completed. It is the nation’s largest ghost subway.

Hawkins added this: “Visiting Cincinnati’s abandoned subway today is nearly impossible. Over the years, the city has done a magnificent job of obliterating almost any above-ground vestiges, save for a handful of innocuous grates embedded in the sidewalk along Central Parkway. Station portals were bulldozed. Tunnels bricked up. Overpasses knocked down. Hardly anyone is left alive who remembers the rise and fall of the subway firsthand. There’s no way into the tunnels — unless you know where to look.”

The Proper Boys obviously did. So, as it happened, did Jake Mecklenborg, author of Cincinnati’s Incomplete Subway: The Complete History.

Mecklenborg took Hawkins on a tour of the abandoned subway and its history, and also brought Hawkins up to the present.

In 2002, Cincinnati’s voters had a chance to resurrect their incomplete subway, to transform it from a graveyard of embarrassment to a linchpin in a multi-billion dollar transit plan. The Southwest Ohio Regional Transit Authority proposed a ballot referendum called Metro Moves, which would have created an extensive light-rail system incorporating the three remaining 1920s-era subway stations at Liberty, Brighton, and Hopple streets . .

Metro Moves was the result of a decade-long effort to bring light rail to Cincinnati. Moreover, it was the city’s chance to erase the stain left behind by their unfinished subway project. But Hamilton County residents rejected Metro Moves in a 2-to-1 vote, with over 68 percent voting against the project.

Today, most people don’t know why the subway was never finished. Even Murray Seasongood, the posh city manager who was most responsible for its demise, didn’t seem to understand his own role in the boondoggle. When he was researching his book, Mecklenborg stumbled across an old interview from the 1960s with Seasongood, who was in his 80s at the time. The interviewer, a college student from the University of Cincinnati, asked him if he regretted killing the subway. “He was very jovial, very enthusiastic,” the student said of Seasongood. “But as for the details of the subway system, he could not recall them.”