Posted on November 29, 2021 by Campaign Outsider

The building was forty-one years old [in 1969]. Hard years. In a cramped and shopworn corner of the city, one flight up from the

train station, surrounded by elevated subway tracks and an elevated highway that kept sunshine and clean air at a distance, the place was sports’ version of an Edward Hopper painting . . .

If the Fabulous Forum was time travel into a Tomorrowland kind of Disney future, the Garden was a walk down the stairs into a cluttered carnival past. Or up the stairs. Up a bunch of stairs . . .

Especially the Stairway to Nowhere, which went from the balcony level to, well, nowhere. That was the place my pal Rob and I went to split a joint at halftime of the Boston Celtics games we frequented in the late ’70s, at which time we witnessed up close and personal The Great Sidney Wicks/Curtis (Skid) Rowe Dumpster Fire of 1977-78.  As best I can recall, in that 32-50 regular season, the only thing the Celtics led the league in was getting hit in the back of the head with the ball.

Rob and I were up close and personal only because of the anemic attendance at the Garden back then. We’d buy the cheapest balcony tickets available – two or three dollars – then gradually work our way down to the good seats that were largely unoccupied. 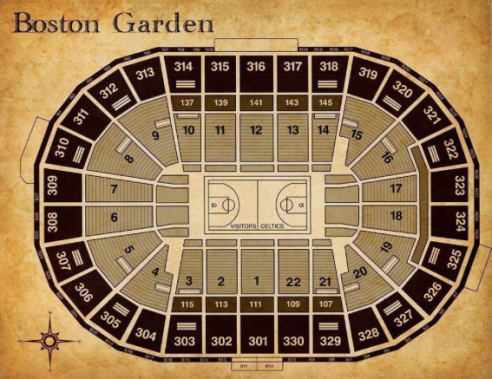 Other times we’d migrate elsewhere in the pricey seats and be more raucous.

Back then, believe it or not, fans could walk around the perimeter of the Garden parquet during halftime, which Rob and I would do on a regular basis. I would also approach the totally cute Garden Gal distributing mimeographed stat sheets to the press corps and ask her for a copy.

How’s it going – can I get one of those?

No. These are for press.

Back in April of 1976, Auerbach was flacking a new book – Basketball for the Player, the Fan and the Coach – so he would pretty much talk to anybody, which happened to include even me.

About 15 minutes into the interview, Auerbach let me know it was over by starting to go through his mail.

Postscript: The Wicks/Rowe debacle didn’t turn out to be a total loss: After the ’78 season, Wicks got shipped to the San Diego Clippers in return for Nate Archibald, Marvin Barnes, Billy Knight, and two second-round draft picks.

One of those draft picks turned into Danny Ainge, who would become a fixture at the Boston Garden in the coming years (as would Tiny Archibald).

In the fall of 1979, Larry Joe Bird swooped into Boston, the Hick From French Lick in the Hub of the Universe.

Not long after Bird’s arrival, I became Senior VP/Creative Director at a Boston advertising agency and decided that one of my fringe benefits should be an unlimited supply of Celtics tickets. Luckily, for reasons I’m still too discreet to divulge, one of the agency’s partners was wired like Con Ed, so he became the ticket master.

I subsequently found myself quite often sitting in Loge 20 at the Garden (see chart above), which was conveniently located behind the visiting team’s bench so that I could yell at Hubie Brown, the preternaturally unlikable coach of the New York Knicks at the time, for hours on end.

It got even better from there.

In ’82 the Celtics also came back from a 3-1 deficit to tie the series. But Game 7 was not a repeat – the Sixers cruised to a 120-106 win that cemented Andrew Toney’s status as The Boston Strangler.

The Missus and I ruefully, but lustily, joined in the Garden-wide chant of “Beat LA.”

Two years later we were at the Garden for Game 5 of the 1984 NBA Finals, the legendary Heat Game between the Celtics and the Lakers.

Here’s the redoubtable Bob Ryan in a Boston Globe retrospective.

There were some hot nights in that old building over the years, but there was never one like the evening of June 8, 1984. The male fans wore shorts and short-sleeved shirts. The women wore, well, as little as possible. Halter tops proliferated. There was never a day or evening in the long history of that building when there was so much exposed skin.

The Lakers did not like it, and Kareem disliked it most of all. He was 37, and fairly cranky to begin with, and playing a Finals game in 97-degree heat was not his idea of fun. He would shoot 7 for 25 and wind up sucking on oxygen (honest).

Meanwhile, a lobster-red Larry Bird racked up 34 points (on 15 0f 20 shooting) and 17 rebounds, Robert Parish had 13 points and 12 rebounds, and Kevin McHale notched 19 points and 10 rebounds.

Talk about your Big Three.

Magic Johnson? Ten points and five rebounds, although he did have 13 assists, as the boxscore notes.

By the second half, Garden concessionaires had run out of ice and the entire place had run out of paper products. No doubt Red had also cranked up the heat in the visitors locker room.

The Missus said, “I can’t believe they’re actually playing in this heat.”

But they totally did.

Back to Bob Ryan: “I play in this stuff all the time back home,” sneered Larry Bird. “It’s like this all summer.”

As the ’80s wore on, my fringe benefits at the ad agency started to depreciate, with Garden seats shifting from loge to mezzanine to the balcony, which afforded views like this one.

Eventually I began leaving the nosebleed section at halftime and cruising the walkway behind the loge seats for the rest of the game. Sometimes I’d be moving with the action, sometimes against it, but the walking provided a nice rhythm – and a better view.

On May 22, 1988, though, I was in the balcony with my brother Bob for Game 7 of the Eastern Conference Semifinals, which turned into a classic shootout between Larry Bird and Dominique Wilkins of the Atlanta Hawks.

“It was like two gunfighters waiting to blink,” recalled Celtics forward Kevin McHale. “There was one stretch that was as pure a form of basketball as you’re ever going to see.”

The game was tied 86-86 with 10:26 to play when the teams’ respective stars took over. “They each put their team on their back and said, ‘Let’s go,’” said Hawks coach Mike Fratello.

Bird scored 11 points after that, including the go-ahead basket with 3:34 to play and a stunning three-pointer over Wilkins with 1:43 left. Wilkins matched Bird’s 11 points during that stretch, but it was not enough.

The whole thing was breathtaking.

And, for once, I was nailed to my seat in the nosebleed section.

I left the ad agency the following year and set up a one-man creative shop that, unfortunately, could not afford fringe benefits (not to mention I was wired like a space heater). So I never did get back to the Garden.

I did, however, have as one of my new clients Vanasse Hangen Brustlin, an engineering firm that oversaw the Garden’s replacement (then called the Shawmut Center, later called the FleetCenter, now TD Garden).

The project was decades in the making, given the complexities of doing anything significant in Boston. There were dozens of surface rights, scores of air rights, and even more underground rights to buy out, not to mention the endless succession of politicians that also needed to be bought out.

But eventually, it got done.

Construction began on April 29, 1993. Plans for the new arena stated that it would be slightly north of the old facility. The term “slightly north” ended up meaning that there were only nine inches (23 cm) of space between the two buildings when construction was completed. The site for the new arena occupied 3.2 acres (13,000 m2). It eventually cost $160 million. The ground was broken on April 29, 1993. In 27 months, quick by today’s standards, the arena was built. That included seven weeks of delay caused by heavy snowfall. The Shawmut Center opened on September 30, 1995.

Sometime after that, my VHB client took me, as a sort of bonus, to the new arena for a Celtics game. It was quite different from the old Garden (Leigh Montville: “Rats as big as rabbits could be spotted, bold as paying customers. The smell of the circus would linger for a good month.”)

I hated the new place.

But he was my (paying) client, so I said with as much enthusiasm as I could muster, “It’s so clean. And look at all the cupholders.”

I never went back for another game.