Item: The hardworking staff will be president before Bill de Blasio is

This is just idiotic.

Bad enough that the 2020 Democratic presidential field includes the likes of Rep. Eric Swalwell (D-Nowhere), Rep. Tulsi Gabbard (D-Meshuggeneh), and the Bay State’s own Rep. Seth Moulton (D-Doghouse). Now we get  this (via the unsinkable Maggie Haberman‘s Twitter feed). 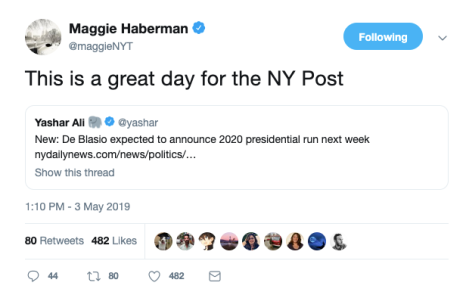 The Daily Beast summed it up this way: NYC Mayor Bill de Blasio Unites the Nation: No One Wants Him to Run for President.

Sen. Michael Bennet (D-Why Not?) has thrown his ski cap into the ring, forcing his brother James, who happens to be the editorial page editor of the New York Times, to recuse himself from all 2020 presidential coverage.

• A few months ago, 37-year-old South Bend mayor Pete Buttigieg had about 60,000 follower on Twitter. He now has over a million.

• Pete’s husband Chasten Buttigieg – who not long ago was a homeless community college student/barista – has over 300,000 followers. 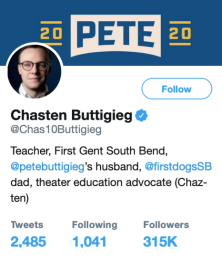 • The two of them are the cover story in this week’s Time magazine.

Man, that is some serious media mojo.

Wall Street Journal columnist Peggy Noonan had one of her We Are the World moments in the latest Weekend Edition of the paper.

Republicans in a Nation Needing Repair

I want to say something big, quickly and broadly.

figure out the future of the Republican Party. He said that in presidential cycles down the road, it will be a relief to get back to the old conservatism of smaller government, tax cuts and reduced spending. I told him what I say to my friends: That old conservatism was deeply pertinent to its era and philosophically right, but it is not fully in line with the crises of our time or its reigning facts. As Lincoln said, the dogmas of the past are inadequate to the present: “As the cause is new, so we must think anew, and act anew.”

What the nuts graf:

But beyond that fact is something bigger. America needs help right now and Americans know it. It has been enduring for many years a continuing cultural catastrophe—illegitimacy, the decline of faith, low family formation, child abuse and neglect, drugs, inadequate public education, etc. All this exists alongside an entertainment culture on which the poor and neglected are dependent . . .

Wait, what? America’s poor and neglected are dependent on our entertainment culture?

What in the world does that mean?

Do you have any idea?

‘Cause we sure as hell don’t.