New York Times Doubles Down On Its Half-True ‘Truth’ Ad

Posted on April 1, 2019 by Campaign Outsider

As the hardworking staff noted on Saturday, for the past two years the New York Times has been one of the leading voices in the news media’s Pep Squad for Truth – those preaching-to-the-choir ad campaigns aimed at convincing the American public that real news matters. 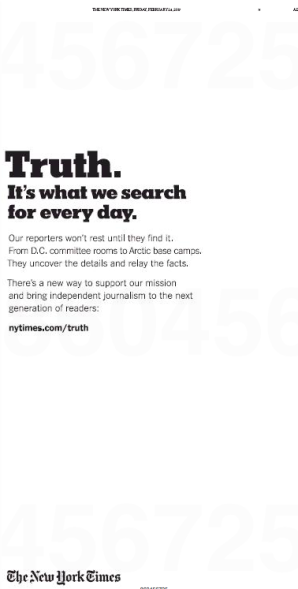 Problem is, the latest additions to the campaign are only semi-truthful.

The new ads revolve around Times reporter Rukmini Callimachi, who “traveled to Iraq five times and unearth[ed] more than 15,000 documents to detail the Islamic States’ bureaucratic and brutal rule.”

And here’s a double-truck from yesterday’s A section of the Times. 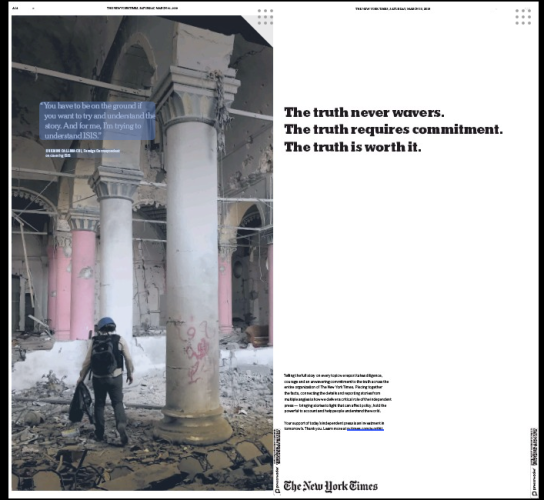 The left-hand page quotes Callimachi: “You have to be on the ground if you want to try and understand the story. And for me, I’m trying to understand ISIS.”

The right-hand page features this copy:

Except those ads decidedly do not tell the full story. As we’ve said, there’s no question that Callimachi’s digging produced some spectacular reporting last year, as well as the riveting podcast, Caliphate.

But the full story of Callimachi’s document snatch is a lot more complicated. Last May, a piece by Maryam Saleh in The Intercept detailed the legal and ethical questions raised by the removal of the documents from Iraq. More recently, a group of Middle Eastern scholars criticized George Washington University for cooperating with the Times in creating an online archive of the ISIS files, as Inside Higher Ed’s Elizabeth Redden reported.

[The Middle East Studies Association’s] Committee on Academic Freedom wrote in a Sept. 25 letter to George Washington that its involvement with the archiving project implicates the university in many of the moral, ethical and professional issues it believed to be at stake in the newspaper’s decision to remove and publicize the documents.

To be sure, in this Q&A last May Callimachi and Times editors addressed many of the concerns that critics have raised (and yes, the original documents were delivered to the Iraqi government).

(Two be sure graf goes here)

Also to be sure, no advertiser is obliged to reveal the whole truth in its ads. In this case, though, the irony is just too thick not to, well, document it.