Posted on February 19, 2019 by Campaign Outsider

Not to say that this has never happened before, but Sunday was the first time we’d ever seen if (tip o’ the pixel to The Missus).

Lee Radziwill, Former Princess and Sister of a First Lady, Is Dead at 85 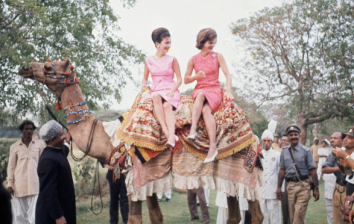 Lee Radziwill, the free-spirited former princess who shared the qualities of wealth, social status and ambition with her older sister, Jacqueline Kennedy Onassis, but who struggled as an actor, decorator and writer to share her sister’s aura of success, died on Friday at her home in Manhattan. She was 85.

But then came something if not unnatural, at least unusual.

In a brief telephone interview for this obituary, Mrs. Radziwill scoffed at the notion that she had had an affair with Mr. Onassis, and insisted that she had “no regrets, none at all,” about her relationship with her sister, which was widely reported to have been strained after Mrs. Kennedy married Mr. Onassis.

Wait, what? The Times interviews people for their own obituaries?

Or should we say, co-bituaries?

That’s a new one on us. Regardless, we are definitely not sitting by the phone.