Back in 1991, when curbside recycling was still in its infancy, I wrote a Boston Globe Magazine piece with the headline, “I’m Recycling As Fast As I Can (Label Removed).”

It wound up with this headline instead. 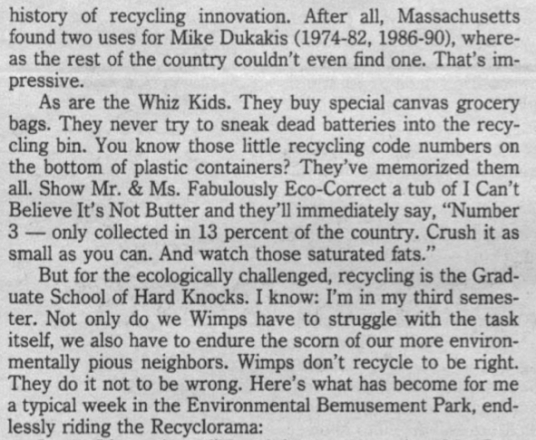 Seventeen years later . . . the rejection stickers are back, as Yasmin Amer and Bob Oakes chronicle in this WBUR piece. 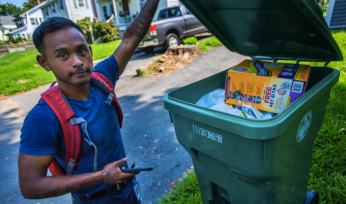 There’s a recycling crisis brewing in Massachusetts and across the country: It’s now costing municipalities more money to pick up our recycling bins.

The problem started at the beginning of this year, when China decided to stop buying recycled materials from the United States . . .

Officials claimed it was too contaminated with things like food waste and thin plastic grocery bags.

That, the piece says, “[is] forcing cities like Lowell to take a closer look at the recycling bins of homeowners.”

Bora Chhun, 27, is a recycling enforcement coordinator for Lowell. His job is to inspect recycling bins for any contamination. If there are items that shouldn’t be in the bin, he tags it with what’s called an “oops tag,” which is a piece of paper notifying the homeowner of what to not recycle.

Then again, it’s better than the solution the Brits came up with several years ago: BinCam.

BinCam’s upper lid has a smartphone that takes a photo of what you’ve just discarded. Upon review, it’s then posted to your Facebook profile where your recycling efforts compete with those of your so-called friends.

It was not well received by, for instance, a certain Leo Hickman, who wrote this for The Guardian.

‘BinCam’ is a rubbish idea that should be trashed

Here’s something I don’t get to say too often: I’m in agreement with the Daily Mail. For once, I find myself nodding at its frothing rage: this time over a new recycling scheme called “BinCam”. (You can probably already tell where this is going.)

The scheme being piloted by researchers at Newcastle University is, according to the Mail’s headline, a “snooping device that can record everything you throw away”.

It’s hardly surprising that the Mail has zeroed in on this project. It pushes all its readers’ trigger points: rubbish collections, over-reaching councils, privacy violations; scientists in ivory towers; evils of the internet.

But, for me, the over-riding reason why such a scheme is destined to be rejected by the public is that it is, yet again, an example of hitting people with a stick – this time, shaming by peers – to get people to recycle.