NYT’s ‘New York City Haiku’ Has Nothing on Félix Fénéon

A few months ago the New York Times ran a New York City in 17 Syllables contest, soliciting haikus (three lines of five, seven and five syllables) about the Big Town.

For National Poetry Month, The New York Times asked readers to write haiku about the city: three lines of five, seven and five syllables. The response — more than 2,800 submissions in 10 days — was as impressive, and as exhausting, as the city itself. Writers were asked to stick to six subjects: the island, strangers, solitude, commuting, 6 a.m. and kindness. Beyond that, poems could be fashioned from whatever inspiration the five boroughs provided. 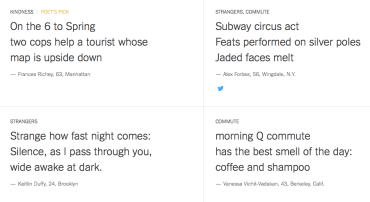 Now there’s a book of the city ditties, as this ad in yesterday’s Times announced.

Excellent: A thoughtful and fun testament to the city and its people.

But those haiku are a trifle compared to what Félix Fénéon produced in 1906 with his 1,220 faits-divers (“sundry events”) in the Paris daily Le Matin, almost all of which are collected in Novels in Three Lines.

Félix Fénéon was “invisibly famous,” as Luc Sante wrote in his introduction to the book, a major literary and cultural figure who “kept himself to himself.” In a 2007 London Review of Books piece, Julian Barnes provided a partial resumé.

Art critic, art dealer, owner of the best eye in Paris as the century turned, promoter of Seurat, the only galleryist Matisse ever trusted; journalist, ghost-writer for Colette’s Willy, literary adviser then chief editor of the Revue Blanche; friend of Verlaine, Huysmans and Mallarmé, publisher of Laforgue, editor and organiser of Rimbaud’s Les Illuminations; publisher of Joyce and translator of Northanger Abbey.

Best of all: Fénéon was a committed anarchist – while working for 13 years as a clerk in the French government’s War Office. Barnes again:

He supported the cause as journalist, editor and – almost certainly – bomb-planter. In 1894, he was arrested in a sweep of anarchists and charged under the kind of catch-all law which governments panicked by terror attacks stupidly tend to enact …

When the presiding judge put it to him that he had been spotted talking to a known anarchist behind a gas lamp, he replied coolly: ‘Can you tell me, Monsieur le Président, which side of a gas lamp is its behind?’ This being France, wit did him no disservice with the jury, and he was acquitted.

In his work for Le Matin, Fénéon was in many ways the first micro-blogger, so it’s only fitting he has his own Twitter feed.

A far cry from an upside-down map, eh?